When Caroline Townsend Comstock took the phone call from the Chicago Daily News reporter — learning that her grandmother was dead; she had died a year earlier; her mother and sister had buried the body under their backyard geraniums; they had since been arrested; and occult practices were involved — she didn’t scream or hang up the phone. If she was shocked, it was quickly outrun by years of frustration.

Caroline had been married in a bohemian ceremony, at dawn, on the top of a mountain. Her husband designed bookplates and was an expert lepidopterist. They began their married life in an artists’ colony. She knew about choosing a life outside the mainstream. And she also recognized that this was beyond even that.

“I knew something like this would happen,” she said with resignation.

The Joys of a Congenial Union

Achsah Chamberlain (“Ruth” to friends and family) and Charles W. Townsend didn’t meet until they were grown, but they shared matching childhoods. Both of them were born in New York, in the mid-1800s, to farming families. In fact, the couple grew up only 10 years and 200 miles apart (Laurens for her, Lockport for him).

In a bit of irony or maybe fate, their hometowns are almost equidistant from Hydesville, NY, where the American spiritualist movement took off in the 1840s. Decades later, that movement would come between them in a much more temporal way. The region was a hothouse of new religions and revivals of old ones. It was nicknamed “the burnt-over district,” because in the early 1800s, there were so many religious converts, there were no unconverted people (“fuel”) left. Charles and Ruth arrived as these movements were dying down, but not gone. There’s no telling what alternative religious practices they may have seen as they grew up.

Charles
Charles was born in 1849, to a family of means near Niagara Falls, NY. Despite his pastoral upbringing, he was destined for office work. By 1870 he and his siblings had relocated to Chicago, where their parents ran a boarding house. Charles was only 21, but already employed as a lawyer.

Their boarding house’s location at 249-51 Indiana Street (now named Grand) means it was directly in the zone that was leveled by the Great Chicago Fire of October 1871. While I couldn’t verify whether the family lost their business in the fire, I suspect they did. An ad from the address, dated a few weeks later, still rings with the panic of that terrifying event.

Charles stayed in Chicago a few more years, and then headed west — but not for law. The 1880 census recorded him near Emporia, KS, working in the “sheep growing” business. It was a curious digression for the 31-year-old lawyer, and it didn’t stick.

Ruth
Ruth was also a transplant in Kansas, living with her uncle while she studied at the State Normal School in Emporia. Judging by their marriage announcement, she had made her mark as a popular and lively student. Charles and Ruth were married in July 1883, and baby Caroline arrived the following summer.

Sheep-raising is a tricky business. Charles now had a family to feed, and steadier income was needed. By the time their next child, Lilian, was born in 1887, the family was back in Chicago and Charles was selling insurance.

Lilian, though, was a heartbreak; she lived only 18 days. The family remained just the three of them until 1891, when Ruth gave birth to their son Frederick. Little Marian was last, arriving in 1895.

The growing family settled among other middle-class strivers and white-collar workers on South Michigan Avenue. There was now a house big enough for the children, with the pleasures of Washington Park just a few blocks away. The Townsends didn’t make the news often, but they appear to have enjoyed life.

But it wasn’t all perfect. Forces were about to overtake them.

“Progressive occultism in Chicago in 1893 and the years immediately preceding the World’s Fair brimmed with an expectant hope of providing proof for immortality, reflecting the period’s culture of optimism and faith in scientific progress.” — John Andrick, “A Modern Mecca of Psychic Forces: The Psychical Science Congress And the Culture of Progressive Occultism in Fin-De-Siecle Chicago, 1885-1900

The spiritualist movement that began in Hydesville, NY, had only prospered. By the end of the 1800s, the American public had been in its fascinated thrall for decades. Chicago was no island removed from the fad — in fact, it was a nexus.

“In the decade from the mid-1880s to the mid-1890s Chicago was a center for American occult activity, boasting a number of spiritualist and theosophical organizations along with its own independent psychical research society, the Western Society for Psychical Research.” — J. Andrick 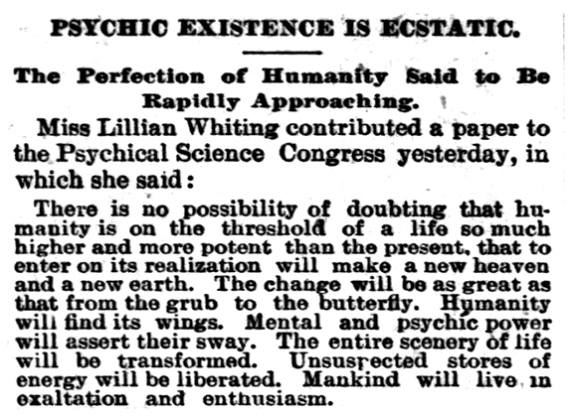 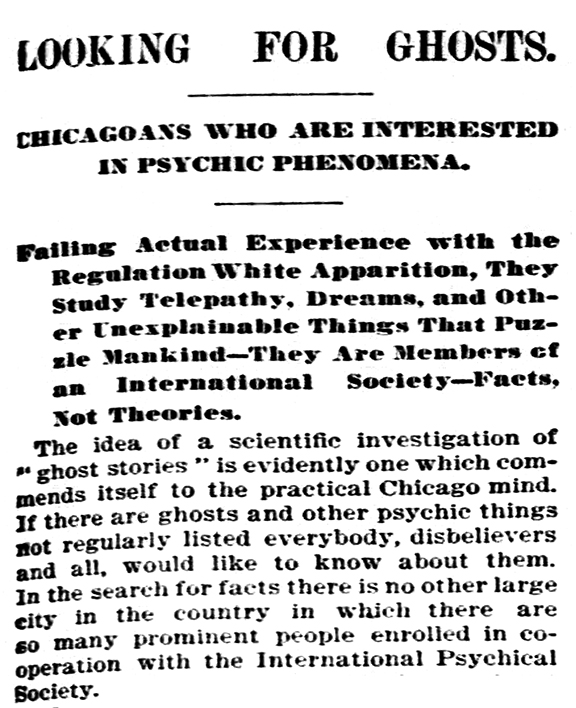 Psychic conferences and lectures abounded in the city. Spiritualist newspapers and journals were readily available, and spread through the country thanks to Chicago’s centrally located railroads. The World’s Columbian Exposition of 1893 featured a “Psychic Science Congress.” Every week, newspapers carried columns of ads for clairvoyants. Whatever your preference, there was a card reader, palmist, or dubious “professor” happy to take your money and tell your future.

The spiritualist movement held particular pull for women. Many spiritualist organizations put women in management positions, providing social, even professional, opportunities. There was also the appeal of learning new things, particularly for women whose educations were truncated. These organizations often dovetailed with other movements, so a woman who started at a fortune teller might end up being exposed to ideas about New Thought, hypnotism, free love, alternative religions, even metaphysics.

It was women who provided Ruth’s first link to spiritualism; reportedly, her friends took her to a séance and she was enthralled. Other sources connected her interest to the death of her father in 1901. Whatever the impetus, she was hooked.

Caroline’s recounting of this history was backed up by her brother and father; the press had now located both.

All three explained that the family had tried to accommodate Ruth’s new fascination. According to Frederick, “My father and myself were not antagonistic [to her interests]. Our ideas were different, but we believed the laws gave everyone a right to believe as one pleased.” He was even willing to consider that she could be correct.

Charles’ retelling was sadder, the experience of a man who had tried to keep his marriage together, but failed. “My wife was crazy about all the fads. There was not a freak religion dealing with spirits that she did not take up,” he said.

By 1904, appeasing her was not enough. Ruth declared that: “A husband hampered her efforts, that life as then lived was not in harmony with the spirits.” There was no hope of saving the marriage.

The family broke up shortly after, with Frederick (13) going to live with his father and Marian (9) with Ruth. Yet the 1910 census shows four of them in an apartment on South Park Avenue, just blocks from the previous family home. Maybe there was a reconciliation, or maybe Ruth wanted to present a more intact family to the census-taker.

Around 1914, the split was made permanent. Ruth and Marian moved to the little storefront artists’ studios at Stony Island and 57th Street, and Ruth’s elderly mother Nancy joined them. It was a meager existence in three rooms. Ruth didn’t work, and it looks like Charles and Ruth never divorced — in fact, he continued to send money to the women until early in 1921. It was a curious arrangement, separate but distantly supportive.

Maintaining contact meant that Ruth continued to push her influence on her children.

According to Caroline, Ruth had even tried to interfere in Frederick’s marriage, to the point where he had to elope and move out of state. (Some of Ruth’s concern may have been based in more earthly worries—that Frederick would have to stop sending her money.)

At the heart of everyone’s concern was Marian, who was showing real promise as a classical pianist and violinist.

But if music was guiding half of Marian’s life, Ruth was guiding the other half. Ruth, who was increasingly hyperfocused in her beliefs, and stubborn to the point of domineering. While her siblings built distant new lives in other states, Marian was under her isolating influence. Everyone in the family was aware of the problem, but unsure what to do about it.

“After her graduation [Marian] was given a good position with high opportunities. If she had stayed there everything would have been all right, but her mother objected for some reason and took her away,” said Charles.

Ruth’s limitations meant Marian’s ambitions grew muted. Instead of aiming toward concert halls, she played small events for money and taught piano. Any earnings went toward paying household bills. Over time she even pulled away from her friends.

As Caroline said, they kept their lives a secret. ☗

Next time: The inquest

One thought on “Mother Love: The Townsends (Pt 2)”