How to start with not even a name, and end up at a love story.

Last week my ancestors—probably in cahoots with the algorithm at FamilySearch.com—slid another surprise birth certificate in front of my face. “Let her try this one…” I’m sure they snickered.

Well they should, as it didn’t list a name or even indicate the child’s sex. It granted me only a birthdate from 1881, and the names of my great-great grandparents, at their home address. It was just enough information to get my attention, and not enough to exactly match any established relatives. The ancestors know what they’re doing.

END_OF_DOCUMENT_TOKEN_TO_BE_REPLACED

A records search revealed a story I didn’t know was there.

Earlier this week my Twitter feed blew up. Reclaim the Records, a nonprofit advocacy group, announced that they had received access to the scanned birth, death, and marriage records held by New York City’s Department of Records and Information Services. A beta website would be immediately forthcoming.

Genealogists’ work is often done by inches, record by record, because municipal governments like to hold on to their documents very tightly. You pay a fee, and then wait 6 weeks, or maybe 6 months to get one piece of paper. If they can find it at all.

Watching a bunch of history geeks get unfettered access to thousands of scanned records, for free, RIGHT NOW, was like watching a pinata burst open. It’s just that the pinata was full of old, handwritten papers, and the kids were actually adults. For genealogists, this is the best kind of party.

I couldn’t give the records my full attention, but I was elated to find one thing right away. Based on other records, I’ve long suspected that two maternal great-grandparents lived next door to each other. I found the marriage record that confirms this.

This Brooklyn stoop romance of Willam and Elise features the great-grandmother I discussed in this post. Their marriage got a brief 7 years; the influenza took her in 1918. Piecing together her family line has been my proudest work, but also slow going. There have been many, many Brunjes (or Brunges, or Brünjes) in Brooklyn over the decades, and I’ve never been able to untangle their lines. With these newly available documents, maybe I could.

Elise was the first daughter of her parents, Arend and Minnie (Huppler) Brunjes. She had one younger brother, Herman. I also knew from the 1900 census that Minnie and Arend had lost a child at some point before then.

When I finally had time to dig in on Thursday night, I started opening Brunjes birth certificates one by one, logging births, dates, and parents into a spreadsheet. Like in Whitman: “… the proofs, the figures, were ranged in columns before me.” I work better that way.

I found their boy. A son was born to Minnie and “Ahrent” in the summer of 1893. There was no name on the certificate, but now I had a solid birthdate.

I also uncovered a death record that seemed to match his age, a six-week-old baby boy dying in August 1893. The vague blur of a child comes into focus: Benjamin Brunjes. Born June 22; died August 1.

His life was cruelly short – by the time the city finalized his birth record, he was already gone. He spent the last two weeks of his life sick with cholera infantum (which is not actually cholera), which ran rampant those years. So many were lost. Poor Minnie; poor Arend.

I logged about 50 entries, searching under every variation of spelling. It got late. My eyes were tired. Our kitten was bored and wanted attention. I must have been tired because here was the baby’s certificate again, but I had already logged it.

This was a second certificate, for a second baby.

Minnie had given birth to twin boys that summer afternoon.

No wonder there were no names on the certificates – Minnie and Arend were probably too surprised. Their joy, but my confusion. Why would Minnie tell the 1900 census that she had lost one, when it was actually two? And who was this? Where was he?

I took a night to regroup and consider my resources. The next morning, armed with fresh coffee, I started at the NY records site. Perhaps his brother’s death certificate was close by in number? It was not logged within 20 certificates of his, so I moved on.

My greatest stroke of genealogy luck has been to have relatives interred at Green-Wood Cemetery in Brooklyn. The management of Green-Wood, bless them and keep them, has a useful burial search tool on their website (not all cemeteries do).

There is Benjamin, buried on August 3. Two days later, a Theodore Brunjes was buried in the same lot, same section, same grave. Also nearby: the boys’ grandfather, their uncle, a cousin.

His name was Theodore.

Municipal offices want to treat records as bricks: discrete and identical, to be moved or sold as needed. But where they see bricks, genealogists see a wall, or a home, or a church. We see what results when you put those bricks together.

When I put those bricks together, I can see stories. I see parents who had to put their babies in the ground, twice in one week.

And I see them years later, in their living room, congratulating their daughter and new son-in-law.

Finding one bluesman was easy. Doing it again is a lot tougher.

All week, I’ve been thinking about this line from the HBO miniseries “Band of Brothers,” which follows the paratroopers of Easy Company in World War II. It’s a moment at the end of episode 4. Operation Market Garden, a massive attempt to invade Germany through Holland, has gone spectacularly badly. The troopers that managed to survive are in a weary retreat, defeated and beaten down. As they leave, Lewis Nixon tells his friend, Capt. Dick Winters, ruefully: “I think we’re gonna have to find another way into Germany.”

Some weeks ago, I had a really meaningful research success. Following it up has brought almost no reward and almost entirely frustration. Nothing is working as I’d hoped. My expectations and anticipations aren’t being met. My standard research techniques are no use.

I don’t like trying to find another way into Germany. Having to spend my time devising alternative research strategies offends my desire for efficiency. Why can’t it all work the way it did before?

It’s not working because… well, for a lot of reasons.

END_OF_DOCUMENT_TOKEN_TO_BE_REPLACED

This morning began with printing out some recipes. Which led to tidying up my cookbook area and baking pans. Which led to pulling out the recipe boxes I’ve had forever, but mostly have treated like bookends.

I love old recipes, but I’m a modern person, right? I never think to pull out a card when I could pull up something on a screen. So the three boxes have sat, rarely touched, until today.

I first started collecting recipes when I was 10 or 11. My Aunt Ginger sent me a little recipe box, with a few of her own included, as a gift. Her choices, like her, were pragmatic and sensible. Her handwriting is clear. It all makes sense.

With that, I was off and running. I tried to emulate her direct style. It didn’t exactly translate. You may well need a translator for my handwriting.

You can also see I had already isolated the first element of a good recipe box: Overwhelming ambition you will never actually carry out. I don’t know how much cream of broccoli soup or tabouli salad 11-year-old me thought I was going to make. I had never eaten either of those things. No matter!

I gave up on writing out cards pretty quickly, opting instead for taping clipped recipes to them. At some point, I dispensed even with the taping, just cutting whatever looked good from the food section of the paper. Emphasis on WHATEVER.

Clearly, I was not going for a theme. Please note: I have still made none of these things, but I’ve held on to the recipes for 40 years. You never know when you’ll need to make a batch of Polish mushroom soup on short notice. I have always been prepared for such an emergency.

Recognizing that 50-year-old me doesn’t want to cook or even order an anisette souffle, I was able to clean out this whole stack today. I kept my aunt’s recipes, and a few of my childhood ones, but that’s all. Begone, obligations of the past. Out, old clippings. That alone allowed me to pare down from three recipe boxes to two.

With the other recipe box—my mom’s–I kept every single thing. Time capsules take all forms.

In these, I can see her early cards, written as an ambitious young bride. And later ones, where she was less striving and more…herself.

This “macedoine of fruit” has to be one of the early ones. I’m 100% sure she never attempted it, but she clearly gave it a lot of thought.

My favorite part is the notation about “flaming cubes.” For the love of all that is edible, flaming cubes of…WHAT? WHY?

It’s cousin in the box is “frozen Caribbean salad,” which requests a cup of mayonnaise and a cup of whipped cream. Presumably to make it creamy.

In rereading, I see that she forgot to indicate when you add the pineapple, so that the recipe (as written) is one banana in two cups of white goo. I guess you could put it in any time, really.

Laughs aside, the notes are my favorite part. Who is Fitz? Why does she need to be there by 1:30? Another recipe card notes someone’s flight time from Houston. This was also very her. Wherever she was, my mom’s orbit always included a legal pad or a list jotted on a torn envelope. Underlining and cross-outs were a given.

Just seeing that makes me feel like this box is still hers. But it’s mine now. I patched up its cracked lid and added a recipe card of my own.

Let’s hope that some future finder opts for my scones, and not my grandmother’s corned beef loaf. ☗ 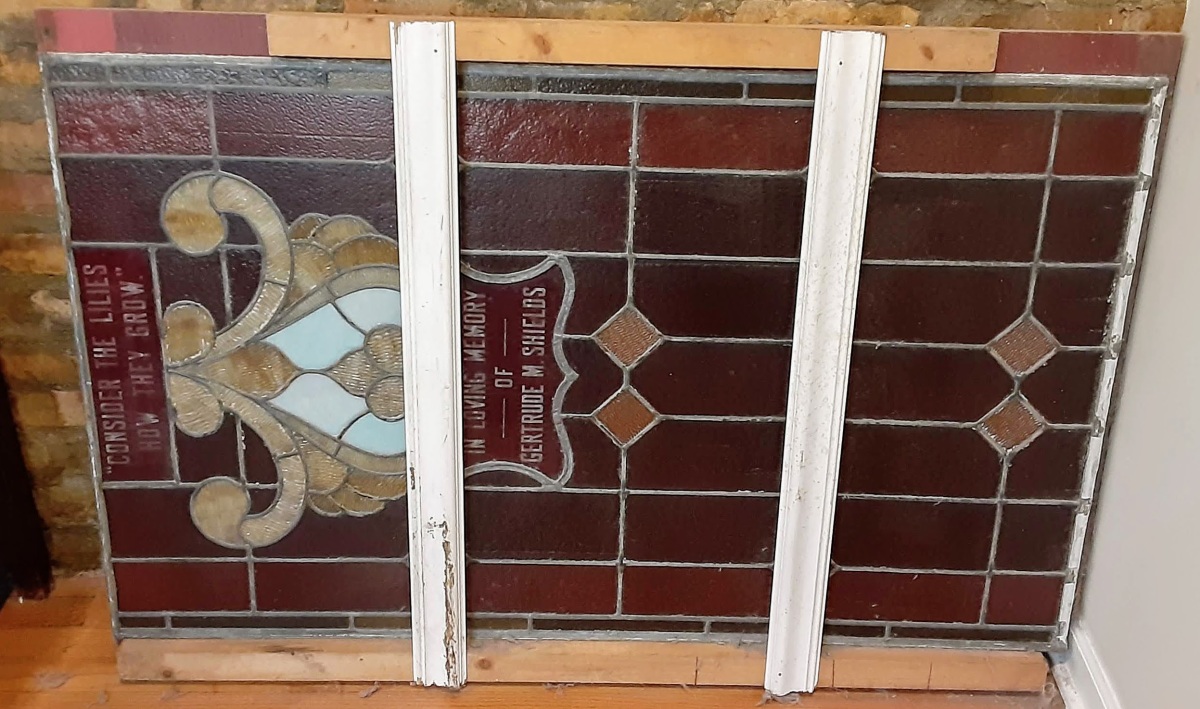 I often reference the burden that carrying your family history entails. I usually dwell on the mental load, how it requires — and can drain — your time and energy and spirit. But other times, I’m talking about an actual, physical burden.

This stained-glass window currently lives in my dining room. I haven’t found a better place for it. I have somewhere in mind, but first, a little history.