One chill February afternoon in 1921, a call rang into the Englewood police station from a Greek restaurant on 63rd Street. Could they please come remove some patrons who wouldn’t leave?

Police arrived to find two reluctant customers: Ruth Townsend (61) and her daughter, Marian (26). The pair had just been evicted from their home a few blocks away, at 57th and Stony Island. It was cold outside. They came to this restaurant, where they’d eaten before, because they had nowhere to go and nothing to go with.

Accustomed to handling sympathetic hard-luck cases, the police took the now-homeless women to the Hackett Stevenson Memorial Lodging House, a women’s shelter on South Prairie Ave. They probably thought that was the end of it.

But a week later, on Valentine’s night, the police had reason to return — and they weren’t bringing valentines. The Townsends’ neighbors had watched their eviction take place, and had seen the furniture piled up in the backyard. They also noticed something that was missing from the scene. Rumors began to spread. Eventually one of the neighbors had approached the police to say: Ruth’s elderly mother was living with them. We haven’t seen her since last summer.

Cared for in Love

The police tried to get an explanation for Nancy’s disappearance. It was difficult from the start. At first Ruth and Marian demurred. Yes, she’d lived with them, but they didn’t know where she’d gone. Ruth offered that not only did she not know where her mother was, she also didn’t know where her husband or son were — not exactly an answer to mollify the police.

The police continued to press, and the women’s answers grew increasingly cryptic. When asked explicitly whether her mother was alive or dead, Ruth began answering with variations of, “She is well cared for in love.” “She is happy in love.” Smiling, she repeated this mystifying answer more than 50 times. Marian was no more helpful; she merely parroted Ruth. She didn’t know where her grandmother or father were, but her grandmother was “safe in love.”

Round and round it went for more than two hours: Aggravated police, a stubborn woman, and the daughter who echoed her every answer. Eventually the frustrated police offered that, lacking any proof of life or a death certificate, they would be forced to search the women’s apartment and dig up its yard. That at last seemed to animate Ruth, who said, “If you do find anything, you can’t prove it’s my mother’s body.”

Stymied, the police took Marian and Ruth into custody.

The next morning, the police began searching for the elderly Nancy in earnest.

Ruth, Marian, and Nancy had shared a small apartment/studio in a curious enclave. Their neighborhood around 57th and Stony Island had earlier housed small shops built for crowds visiting the 1893 World’s Fair. After the fair the storefronts remained. They were truly shops, not designed to be apartments — drafty, small, with few (if any) rooms. But their low rents had attracted artists, writers, and other bohemians, enough so that by 1921 the area had earned the reputation of an artists’ colony. Marian herself was a classical pianist, and her mother was… unusual. The women had been part of the scene there since 1914.

On the scene, the police began to examine the women’s apartment. They knocked on walls and floorboards, searching for hidden spaces. They opened trunks and boxes. They even found an unused tunnel under the sidewalk. But a preliminary dig in the backyard yielded only dog bones.

They did find two things: Marian’s expensive Steinway piano, stashed at a neighbor’s home; and a few assets in a bank account. But no body.

Meanwhile, Back at the Station

While some detectives were digging up the Townsends’ backyard, and others were hunting down the missing son and father, the interrogations continued. To combat the problem of Marian repeating her mother’s answers, the women were kept in separate detention homes.

But separation didn’t solve every problem. Not for the last time, Ruth’s stubborn nature ruled the moment. Police suggested theories and plausible explanations: There was no money for a funeral? You put her in an institution? To all of these, she remained either mum or mystifying — or sometimes, just fed up. “I know! But why should I tell you?” she responded at one point.

They did learn one thing about Ruth, by accident. Hidden in one of her shoes, someone (a matron at the detention center?) found a note that indicated she believed in Rosicrucianism. Ruth had begun to mention a “temple of oneness,” and “the power of one,” but the police were still unsure what it all meant. The note was not much help.

For Marian, the police also brought in the first of several psychiatrists. Away from her mother’s influence, the young woman was able to open up a little more — but only a little. When the doctor asked where her grandmother Nancy was, Marian answered, “The soul spirit is with her.”

And yet that was not as disturbing or sad as her next statement, about friends she no longer saw and family she was missing. 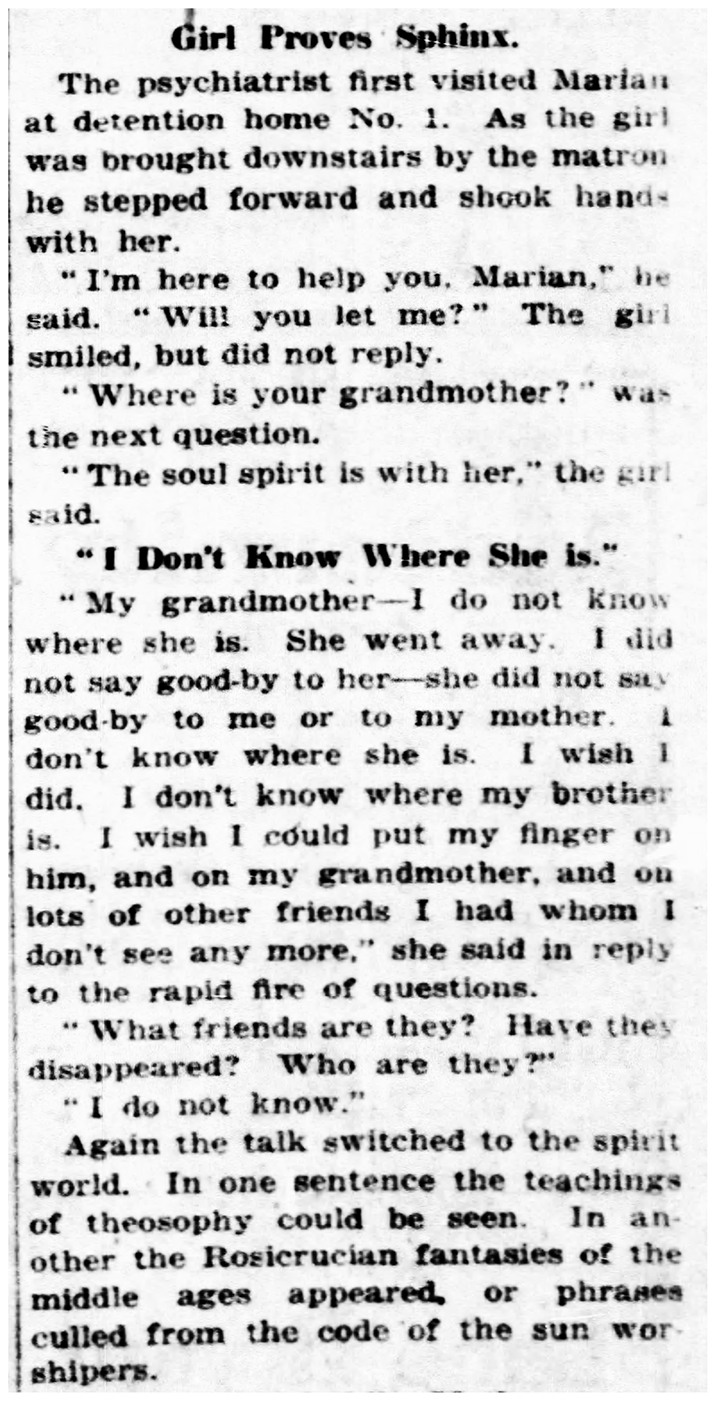 And at some point, she went into a trance.

After the questioning, the police brought the two women back together in front of the press. It was quickly obvious to the collected newsmen that Ruth and Marian were… unusual. It wasn’t just their baffling and inscrutable answers. Marian, quiet and meek, did everything in step with her mother — sitting the same way, keeping her head down, getting water from the fountain at the same time. The Daily News even claimed that the women had “twin personalities” or shared a “telepathic bond.”

The prospect of uncommon religious practices was, naturally, alluring to the newsmen covering the story. The next day’s headlines made it clear where things were heading.

Under the Geraniums
Wednesday, February 16

At about dawn on February 16, the story broke wide open: The police had found a body.

Who exactly found the remains of Nancy Chamberlain is unclear. According to the Chicago Tribune and the Chicago Daily News, police found the corpse early that morning, in the backyard of the studio apartment on 57th. But according to the Streator Daily Free Press, it was actually reporters from the Chicago Herald-Examiner who found her, “after hours of digging.”

Why reporters would be allowed enough liberty at a crime scene to dig up the body themselves is actually the least unusual thing to come out of that long day.

“It Was My Privilege, My Last Act”

Sometime before the discovery of her grandmother’s body, Marian had finally confessed, prompted by a “message from the spirits.” Nancy, in her 90s, had passed away in June or maybe early July 1920. Ruth and Marian had kept the body above ground for at least several days — possibly weeks – while they attempted to establish a supernatural communication with Nancy’s spirit. Once they felt she was speaking to them, the two women dug a grave in the backyard on 57th Street, and buried her.

The Daily News put a spin on this.

Whether the women were actually Chaldean sun worshipers was not going to get in the way of a good paragraph. The image of the Townsends as Rosicrucian/sun-worshiping/chanting/spirit-controlled practitioners of mystical black arts was embraced by the Chicago press, and spread to papers across the country.

Once Marian had confessed and the body was unearthed from what the press quickly dubbed “the love grave,” Ruth conceded to Marian’s account. She had found her mother dead, but it was more complicated than that. Ruth kept her mother above ground so that they might keep communicating. Once Ruth felt she and her mother had established a new communication, she was able to take down Nancy’s burial instructions.

Both Ruth and Marian claimed to have been taking instructions from Nancy’s spirit. That’s what Ruth meant when she said, “she was speaking to me,” “at her direction,” “she did not want a coffin.” Once they had their instructions, the two women wrapped Nancy’s body in a sheet. Ruth dug a shallow grave under her mother’s favorite backyard spot, in daylight, and they buried her there.

Strangeness aside, there is an undeniable love and care that comes through Ruth’s account. In describing the interment, she said: “I enjoyed very much doing it. I did not enjoy anything more. It was my privilege, my last act.”

Along with the body of Nancy Chamberlain, police — and the press — had found the rest of Ruth’s family. Her estranged husband, Charles W. Townsend, was located in Detroit, and her missing son, Frederick, was found in Ohio.

Ruth’s oldest daughter, Caroline Townsend Comstock, was tracked down in California. She couldn’t have been happy to hear about her grandmother’s death, especially via a Daily News reporter. Yet that didn’t prompt her to hang up the phone. To the contrary.

“I knew something like this would happen,” she began. ☗

Next time: A star-crossed family.

© 2020 Tori Brovet/All rights reserved. Unearth me at GraveyardSnoop — at — gmail.com.

One thought on “Mother Love: The Townsends (Pt 1)”