Part 1 of the Inglis family story

Where else would the world-traveling, ship chandling Inglis family land but…Iowa?

Iowa isn’t known for its maritime industry, but it held opportunity for a man who understood money. This seems to have been David Inglis’ shift: From now on, banking would be his business, and it would be in the United States.

There were still trips, of course. In April 1878, David traveled back to Scotland to take his actuary exam. He spent the next 15 years partnered with banker J.F. Latimer at the First National Bank of Hampton, Iowa. Matilda Inglis’ sister, Elizabeth, had married into the Latimer family, so I suspect that’s how the position came about. I also suspect, as the Inglis children were entering their school-age years, one or both of their parents may have wanted them educated in the Western hemisphere.

And, who knows? Maybe Matilda was homesick. She had spent 12 years traveling the Pacific and Asia. Maybe she wanted to come home. I wonder how that adaptation was for all of them. Matilda was the only American; David, Norman, and Charles were all new to this country. The rolling hills and small towns of Iowa must have been quite the change from a Japanese port or a Scottish city.

However difficult the adjustment, the Inglis family stayed put. By the time of the 1880 census, David’s brother Alexander had even joined their household. And in 1883, Charles, Norman, and Ruth became naturalized citizens. The rest of the 1880s and 1890s seem to have been a more settled time as the children grew into adults. In October 1893, Norman married local girl Mae Clemmer, further connecting them to the town.

The family of travelers still managed trips, both extended journeys and short jaunts.

The end of the century marked the end of their Iowa years. In October 1899, David and Matilda, and their unmarried children Charles and Ruth (now aged 29 and 22, respectively), moved to Evanston, IL. Norman, now a banker himself, stayed in Hampton with his wife.

As of the 1900 census, the remaining Inglises were established on Grove St. in Evanston. Ruth studied music at Northwestern University, and Charles worked as bank clerk. They were doing well enough to have a live-in servant. The family plot at Rosehill Cemetery was probably purchased during this period.

It was not without blips: Early in 1900, Norman was fined for slapping a newspaper editor.

A month later, the Latimer bank was sued for back taxes. What role David might have played in this situation is unknown.

As attractive as Chicago and Evanston might have been, the Inglises did not stay long. By the end of the 1900s, the ever-restless family was packing its bags again. Away from the Midwest, and toward the water: They would live on the West Coast for the rest of their lives.

At last, they had found another port city, another oceanside berth for them all: Seattle.

Charles and Ruth, now aged 40 and 33, respectively, would never marry. They remained at home with their aging parents. As it turned out, their new home on Seattle’s Boylston Avenue was only a temporary one. David soon took ill.

Sometime thereafter, Ruth and her mother headed for Los Angeles. Charles continued to spend time there and in Chicago.

In December 1911, Charles (now calling himself retired) moved to Paris. He had the good fortune to be in Europe… and the bad luck to be there when the continent collapsed into war.

He had to get home.

On August 5, Charles applied to the American Embassy in Berlin, and was granted a passport on August 16. On the 20th, he arrived at the Foreign Office, check in hand, to pay for the passport and take possession. But it was nowhere to be found: It was gone. He immediately filed for, and was granted, an emergency passport.

Below is Charles’ handwritten explanation on the back of his emergency passport application.

He probably thought nothing of it — those were chaotic days. It was just more evidence of how things were in disarray. Charles made it home.

On October 2, Dublin police arrested a man they’d been tracking. He was carrying Charles’ passport, but his name was actually Carl Lody…and he was a German spy.

Paired with the stolen passport — possibly provided for him by the German government — Lody had traveled as an American throughout the British Isles for months. Earlier in his life, Lody had lived in the United States, so he was able to manage a convincing American accent. However, with little training, British authorities had sussed out his presence within days of his arrival in August. He had been tracked for weeks.

The situation made national news, and prompted a State Department investigation. Lody was quickly convicted in a public trial and executed at the Tower of London.

As the 1920s approached, the war was not the only concern for the Inglis family: Charles contracted tuberculosis. His death certificate says this happened around 1917 in Chicago. The next year, he gave up his Midwestern base to join his mother and sister in sunny, arid Los Angeles.

Despite his illness, Charles clearly intended to keep going. Below is his passport photo from 1921. 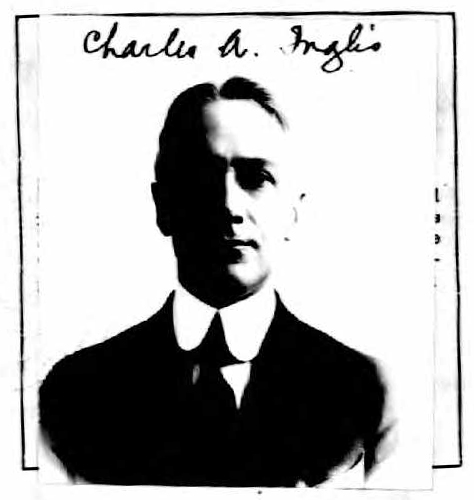 This passport didn’t get stolen, but it didn’t get much use either. In 1923, Charles died at age 52.

Sadly, his brother Norman soon followed. Just before Christmas 1926, Norman died of an appendicitis attack in Tucson, Arizona. Curiously, I was unable to find an obituary for him anywhere. He left behind Mae, two daughters, and two sons.

Ruth, the family’s sole daughter, continued to live with and care for their mother, Matilda. Ruth is a curiosity. She never held a job that was listed in the census. She never married. She did buy land in Carmel in 1921, so she may have been earning money from real estate. She also attended meetings of the Daughters of the American Revolution. But beyond that, I wonder how she spent her time. It’s possible that, being the unmarried daughter, caring for her mother became Ruth’s responsibility.

As of 1930, Ruth, Matilda, and a servant were living in Los Angeles, in what is now Koreatown. This, too, came to an end: Matilda died in 1931, at 86. As discussed in part 1, her obituary had some omissions. But she had lived quite the life — it would have been tough to fit it all in.

After her mother’s death, Ruth gave up the servant and moved to her own place in the 1940s. She appears to have lived quietly in Los Angeles until her death in 1963.

She joined her brothers and her parents at the family plot in Rosehill Cemetery. They were all together again, and finally at rest. ☗

One thought on “Unearthed: The Inglis Family (Part 2)”