Anastasis: Noun, from Greek. 1. A recovery from a debilitating condition. 2. Rebirth. 3. Resurrection.

I wish I could tell you that Cora Stallman’s inquest led to a dramatic court case, full of more characters, searing accusations, and great and deep revelations about the people around her.

I don’t have a good ending to recount because, frankly, there wasn’t one. That’s not what Cora got in the end.

On Monday evening, after Thomas Seaman testified, and after Coroner Frank Schilling presented the forensic tests done on Cora’s organs, the case was given to the inquest jury. They weighed all the evidence, all the words that had been given them, the stories they’d heard from their own neighbors, the assessments from educated men, and decided…. well, nothing. 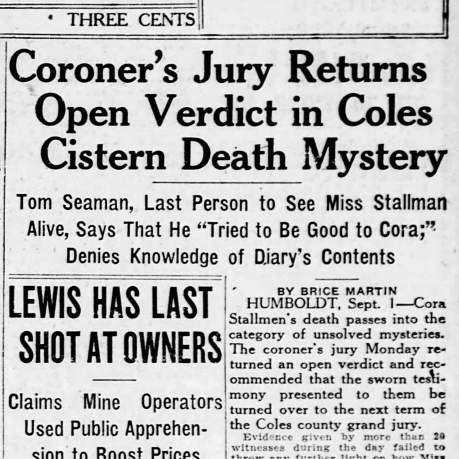 After all that, they couldn’t come to a conclusion. It wasn’t murder, but it also was not-not murder.

The jury declared an open verdict and passed the case to the grand jury in Charleston, IL. The second verdict came down in mid-October: No bill. There was not enough to merit trying anyone, whether for murder or manslaughter. There would be no case. Cora’s death was officially ascribed to unknown causes.

It was just that unsatisfying. I’ve certainly never been satisfied by it. Of all the parts of Cora’s life, I hate her ending most of all.

The rest of them went on, of course.

Late in October 1925, a few days after the grand jury decision, Anna Seaman sold a portion of her farm. I can’t determine if it was the parcel where Cora’s cottage stood. Her reasons, as always, are lost to us.

She and Thomas stayed married until his death in 1941. He is buried in Coles County, near his first wife, the other Cora. I have reason to believe that Anna later moved back to Ohio.

Frank Schilling stayed on as coroner until 1940. He was the rare Republican in an almost-all Democratic government. He was so trusted, at one point he filled in as both county sheriff and coroner during a staffing shortfall. Schilling died in 1953.

Cora’s name would pop up from time to time in the papers, always in the “it happened on this date…” column. But that was it. There were no further investigations, no action news squad juicing their ratings by giving her story a second look. Cora and her story stayed undisturbed.

When I described this abrupt end to my husband, he was quick to respond: “They wanted the Cora story to go away, and they got their wish.”

I don’t think it’s that simple. The inquest jury was handed a case as murky as the cistern itself. Even without the ergot bottle, it would have been a difficult case to prove, with no certain motive and no likely villain. The ergot bottle only makes it worse, because it prompts valid questions about Cora’s role in her own death. And then, a prosecutor should put this up against Thomas, the well-known son of a large and successful founding family?

And yet, all my pragmatic reason is no match for my heart, which will always think that Cora deserved better. That’s part of why I started writing this series back in March: I hate her ending.

I hate that in death, she was so easily dismissed as just a “spinster who jumped in a well.” I hate that a woman who did so much, and taught so many, would die this way – and that her death and really her whole life would just vanish unnoticed. I hate that her family aided in her erasure.

Cora was a flawed but interesting person, and she deserves to be remembered for more than her death.

I wanted to help Cora leave a better mark than fate granted her.

At the outset of this series, I quoted a friend as saying: “Dear Cora. Once again, we plunge into the murky depths of that cistern in Mattoon, Illinois, to try to find her.”

Find her, we did.