He was an artist. He was the best one.

I started nosing around graveyards because I was raised that way. My mother especially never saw a cemetery she didn’t want in on—the more crumbling and overgrown, the better. Bumming around cemeteries was simply a fact of my childhood.

The way I do it now, taking pictures and digging up names, is down to two things. 1) Now I have the Internet. 2) Richard Schober.

Schober is interred at Graceland Cemetery in Chicago. His stone is a missable little grey hump. But if you see it, you’ll stop, as I did that day with my dad in the 1990s. 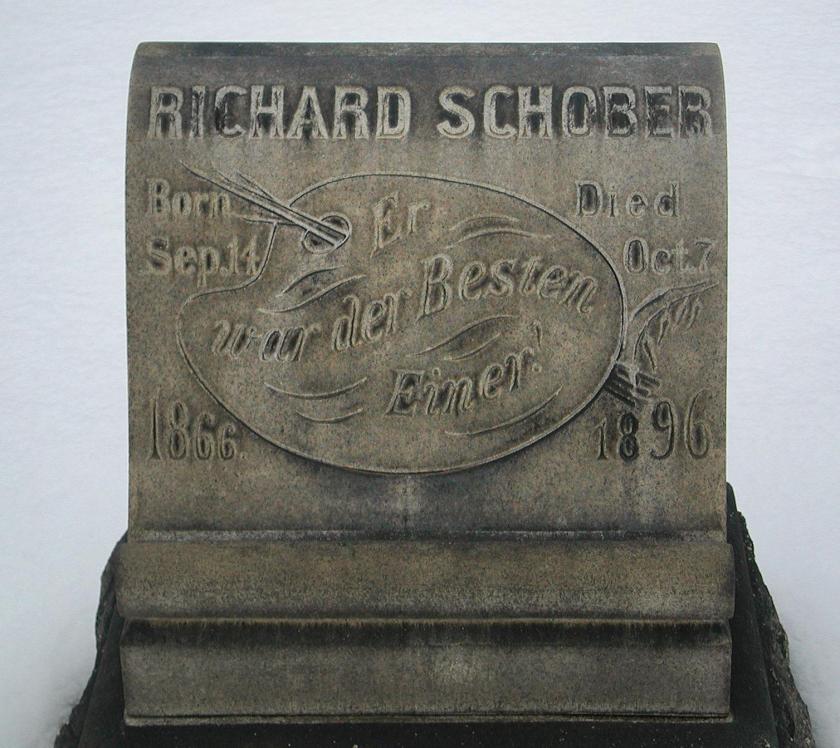 It shows an artist’s palette and broken branches, and in German it says, Er war der Besten Einer! I still knew enough high-school German to translate that as, “He was the best one.” He had just turned 30.

Well that is a story, right there. He was the best one, with an exclamation point? And so young. I wondered, but only wondered, for a long time.

Years later, on an empty Sunday in 2006, I decided to make him a project. I could be a detective, I thought. I even brought a notebook with me, as I had seen on TV. One bus trip to Graceland for photos and notes, then off to the Newberry Library, and a few reels of microfilm later…

Richard Schober WAS an artist, and a very good one. He grew up around art, with a father who owned a successful lithography business. Their 10-room house on Belden Place (now called N. Cambridge Ave.) was in a prominent neighborhood just blocks from Lincoln Park.

Sadly, I haven’t been able to find any images of his art, or of Schober himself. But I did find his passport application, which describes him as slight and fair, about 5’ 8” with brown hair, light blue eyes, and having a small face with a prominent nose.2

Schober traveled far on that passport, studying art in Chicago, Paris, London, and Berlin. He taught and exhibited at the Art Institute in Chicago. He even won a medal for his skill in portraying animal anatomy.3

He was radiating promise. And yet, his many doubts outran him.

On an October morning in 1896, Schober walked into Lincoln Park and shot himself. He left an apologetic note to his parents in his breast pocket.

He’s like that Willa Cather story, “Paul’s Case” — but real.

His death made the Chicago Tribune and even the New York Times. 5, 6

The inquest held later that day blamed insanity brought on by overwork and heat.

After his death, his parents donated some of his books to the Art Institute. The next year, four of Schober’s oil paintings were exhibited at the Institute, as part of the First Annual Chicago and Vicinity show. One of them, Unfinished Portrait of Charles Schober, sounds like it could be either of his father or his younger brother. The “unfinished” in its title rings so loud to me.

He was an artist. He was the best one.

One of the challenges of my research is that because I know people through their endings, those endings loom largest in my head. With Schober, I would rather remember him with the vignette below. He was competing for an anatomy medal at the École des Beaux Arts in Paris.7

I would rather imagine him this way, being applauded by a roomful of impressed Frenchmen.

He won the medal, the first American to do so. Full article about his win here. ☗

A special thank-you to the staff of the Ryerson & Burnham Libraries, at The Art Institute of Chicago, for answering my questions.

6 thoughts on “My First Stone”