If you want a historical parallel for COVID-19, look to tuberculosis instead of influenza.

If you want a historical parallel for COVID-19, look to tuberculosis instead of influenza.

Some weeks ago, I was tagged on Twitter, in a question about design and COVID-19 and the future. Design is another interest of mine — in particular, design as a force for answering questions and making choices. And since I tend to frame things within historical contexts, I’ve been turning it all over in my head since then.

My initial thought is that, in the struggle to cope with this pandemic, we’ve been taking our behavioral cues from the wrong historical marker (I include myself in this), the 1918 flu pandemic. I’ve recently come to believe that 1918 is too easy a comparison. 1918 appeals because that epidemic was a temporary illness that moved through society, and society could kind of just… wait it out. Not a lot had to change after the flu burned its path through the population.

I no longer think we’ll be that lucky. Instead, I think we need to look to a different public health parallel: Tuberculosis.

Thanks to vaccines and antibiotics, you probably never had to think much about TB. But for your grandparents and generations before them, it was an absolutely devastating and unavoidable fact of life. “By the dawn of the 19th century, the disease had killed 1 in 7 of all people that had EVER LIVED — more than any other illness.” (caps mine)

Like COVID-19, TB is contagious. Like COVID-19, you can be sick with TB and not know it. You can spread it to others easily. Without treatment, TB can kill you quickly… or it can linger for decades, causing long-term damage. It can even settle in your bones.

Humanity fought against TB for centuries without much success. Before the isolation of the TB bacillus, people blamed poor food, genetics, or damp, crowded, dark housing, among other things.

About the only things that seemed to work for treating TB were luck and fresh air. So that’s where people put their efforts.

The early 20th-century push to give cities large, fresh air public parks? That was related to the fight against TB.

Reformers opposed to tenements argued that their close quarters exacerbated the spread. The push to get people into separate suburban houses, with distance between them? Connected.

Society was not only trying to fight the disease. It also had to cope with a significant number of people being sick for a long time. Two factors helped this: the growth of organized public health initiatives, and the spread of passenger railroads.

TB sanitariums opened across the country in places known for fresh air, far from crowded and dirty cities. They weren’t free, of course, but patients with means could travel there (usually via railroad). They would stay for months or even years, hoping to get better.

If you weren’t sick enough for a sanitarium, you might move anyway. Western states gained new residents who came because they hoped the very air would be a cure.

What I’m saying is, society was forced to adapt until we came up with a treatment, and we found social ways to manage people with long-term illness. We’re going to have to do that again.

We’re now learning that COVID-19 can leave you with extended illness and damage. We’re creating a population group that is COVID-disabled, possibly forever. This is what interests me, and I don’t think we’re paying it enough attention. 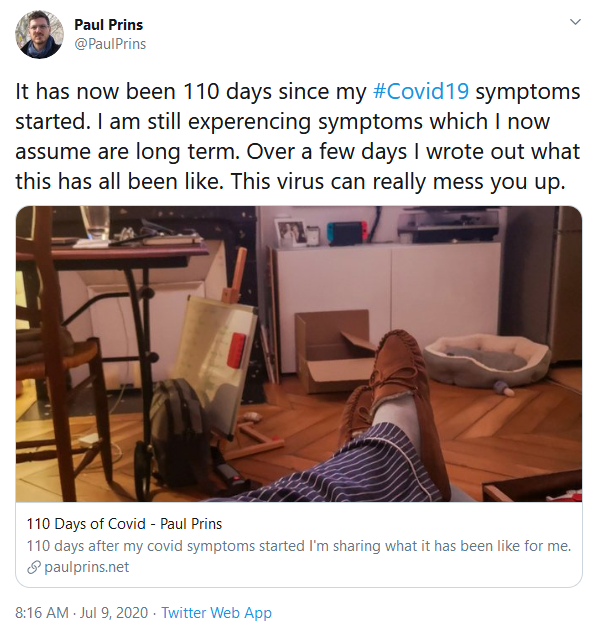 So my thoughts are really questions: How do we take care of these people, who may be sick for the rest of their lives? What accommodations need to be made?

I don’t think sanitariums are the answer. We adapt new housing to work for people with disabilities. Will housing need to adapt for these people (or the rest of us)? Will new subdivisions tout the sealed-off foyer as a kind of airlock? My own building (c. 1925) still has its dairy “receivers” where the milkman would leave bottles. The original no-contact delivery. Maybe those need to make a comeback?

The rise of AIDS/HIV prompted the growth of community-based health services that filled in where the government failed. Will that happen again? Will people with COVID-19 disabilities eventually become a political force, or at least a political issue?

The answer to all of those is: I don’t know, but I do wonder. ☗