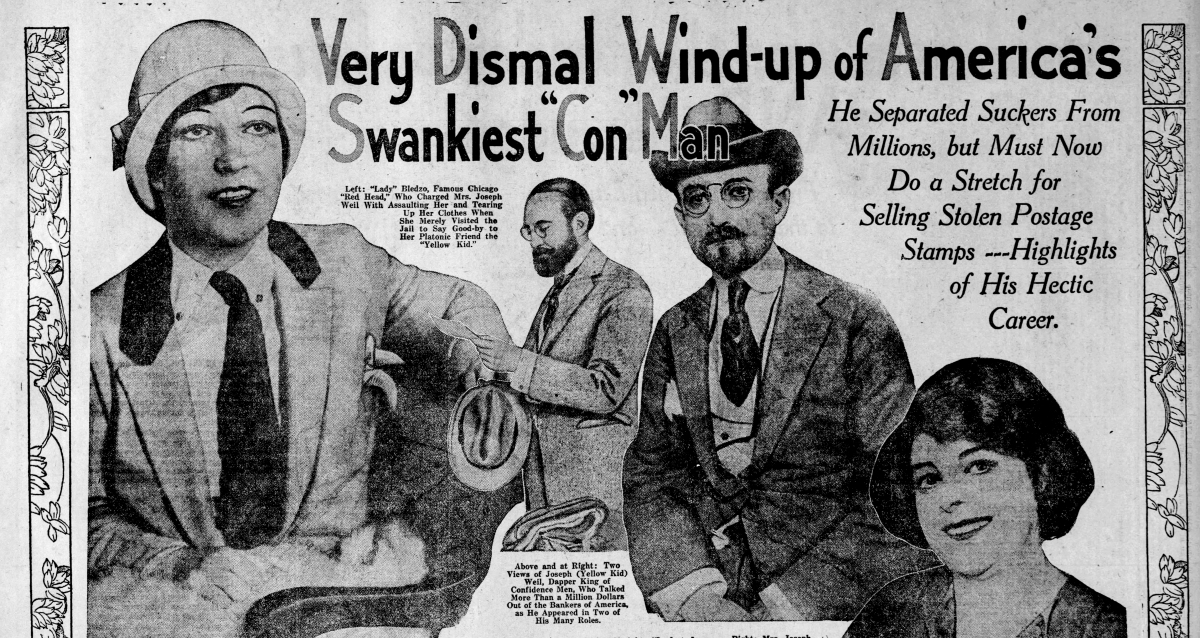 Poised on a spare desk in the Chicago Avenue Police Station, Lady Bledzo didn’t look like she’d just come from a fight. In her crisp white suit and jaunty tie, with a fur across her lap, she looked like she was ready to go shopping.

But excursions to Wieboldt’s or anywhere else would wait.

There had been a fight, right on the sidewalk, and now there were reporters eager to hear her side of things. Lady Bledzo posed for photos and smiled at their questions.

She was happy to oblige.

It was spring. Yet all the season’s bright flowers could not mask the bad news in Lady Bledzo’s life.

Her erstwhile paramour, the con man Joseph Weil, had recently been tried for fencing stolen bonds and stamps. Surprising no one, the jury found him guilty (he was very guilty). Sentencing was imminent. He was facing years in federal prison, hundreds of miles from Chicago.

With this, Lady Bledzo had lost her main means of support and the hotel rooms he paid for. His Shenandoah hotel was no longer an option, so she had decamped for a place downtown: the brand-new Hotel Eastgate (at Ontario and St. Clair). It boasted modern amenities and stylish living…and it was just blocks from the Cook County Jail where Weil was held.

She also dyed her hair red — a classic life-change move.

Saturday, May 29, was visiting day at the jail. Lady Bledzo would later claim that she’d been asked to visit, either by Weil himself or by Anna Weil’s brother, Charles (which would be curious). Both men denied this. Whatever the pretext, there’s no denying what happened outside the jail, when Lady Bledzo and Anna Weil encountered each other on the sidewalk. 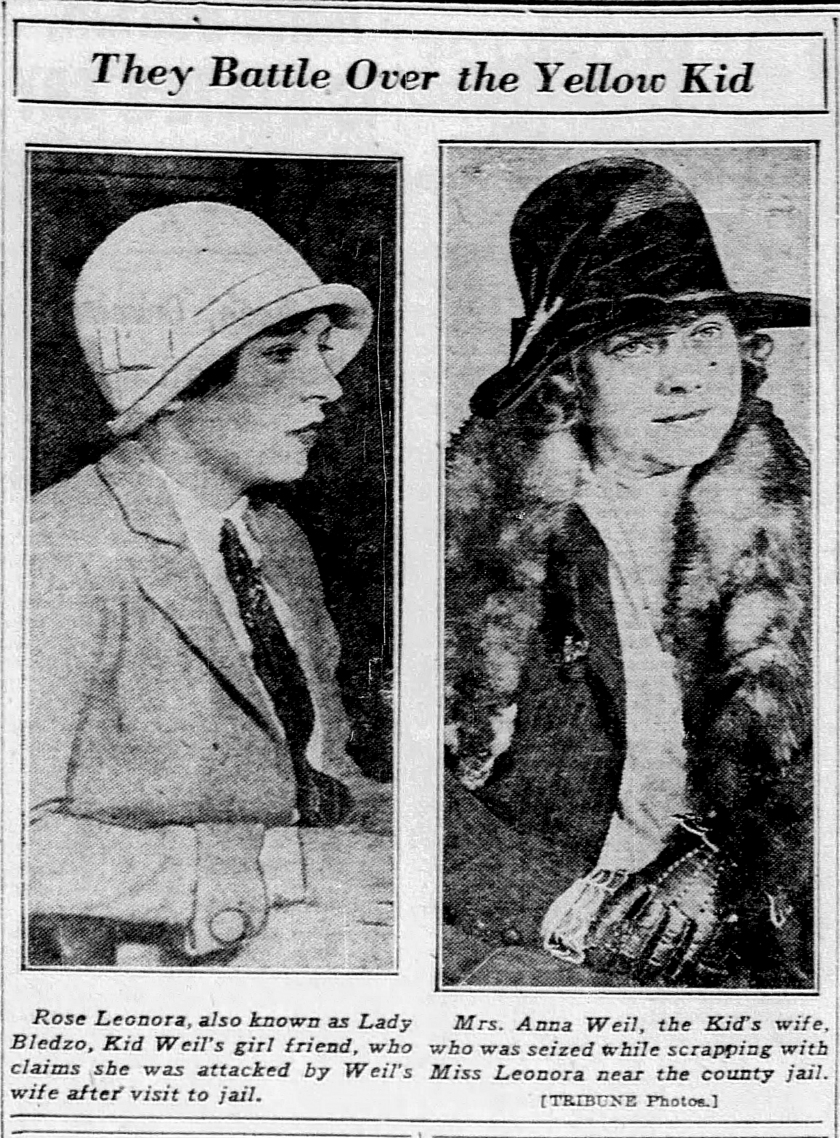 It’s quite a scenario: The devoted wife and the strumpet, scrapping it out in front of the jail for the convict they both love. Hair was pulled. Clothes were ripped. Lips were busted. In some later retellings, “little Josephine” (actually 12) calls Lady Bledzo a hussy.

The reality was probably not so dramatic. There was some sort of tussle for sure. Both women were brought to the police station at Chicago and Clark, where the cops attempted to untangle their stories.

A photo from the station shows Lady Bledzo and her friend, Dale Coudray.* They look quite well put together, considering. Even the contested fox fur got into the photo.

Busted lip or no, Lady Bledzo made the most of the moment.

Her name was Rosa Bledzo, she said, and she was from Mexico City. As she explained, her background was an exotic Spanish and white heritage. Along the way she’d studied at a ladies’ finishing school in Tennessee, and was now working as an artist’s model.

How exactly she got from Mexico City to Tennessee to Chicago went unexplored. Also interesting: She was never noted for having a Mexican accent. (Contemporary newspapers were pretty diligent about noting foreign accents.)

Perhaps she lost it at finishing school.

Only Anna Weil and her brother Charles faced charges, which signals to me that the fight was one-sided. It could well have been a setup. I stick at the line where Lady Bledzo promises to “bring out plenty at the trial.” She sounds like she’s eager to be in court.

The women met again at the arraignment a few days later.

Ostensibly about a court date, this article bristles with a particularly feminine competition. The devoted wife faces down the other woman in her “immense white fox fur,” bought by the wife’s absent husband — and then both of them smile sweetly at the judge.

And yet, there would be no jury trial after all. Despite her initial eagerness to go to court, Lady Bledzo failed to appear on three different court dates. All charges were dropped.

It’s curious that Lady Bledzo would miss her chance to appear as the wounded party for a larger audience, three times. Maybe Anna knew about Lady Bledzo’s actual past. Or, maybe it was as simple as writing her a check. It would certainly have been to both their benefit — Lady Bledzo’s especially, since her immediate future was underfunded at best.

They both had bigger things on their minds. Even the Yellow Kid’s smooth-talking couldn’t save him this time: On June 22, he was sentenced to five years at the federal penitentiary in Leavenworth. (Originally, Atlanta. It was changed to Leavenworth after Weil claimed that Atlanta would be bad for his “hay fever.”)

Both Anna and Lady Bledzo were in court for the sentencing. Weil was sent to prison a few days later.

I don’t think she ever saw him again.

With Weil out of her life for real, Lady Bledzo decamped yet again — this time to the Palais Brompton on Brompton and Sheridan Road (still moving hotel to hotel, maybe outrunning the bills). Like anyone getting over a breakup, she met some new people and tried to have some fun.

Sometimes, Lady Bledzo reads like that friend of yours who always makes the worst choices.

A car full of 20-somethings driving around recklessly in the wee hours of the morning, probably after drinking… She is not making positive choices.

The Hearst Syndicate, through its Newspaper Feature Service, published a syndicated weekend magazine for newspapers. The articles covered popular culture and celebrities, and the writing style was…florid. 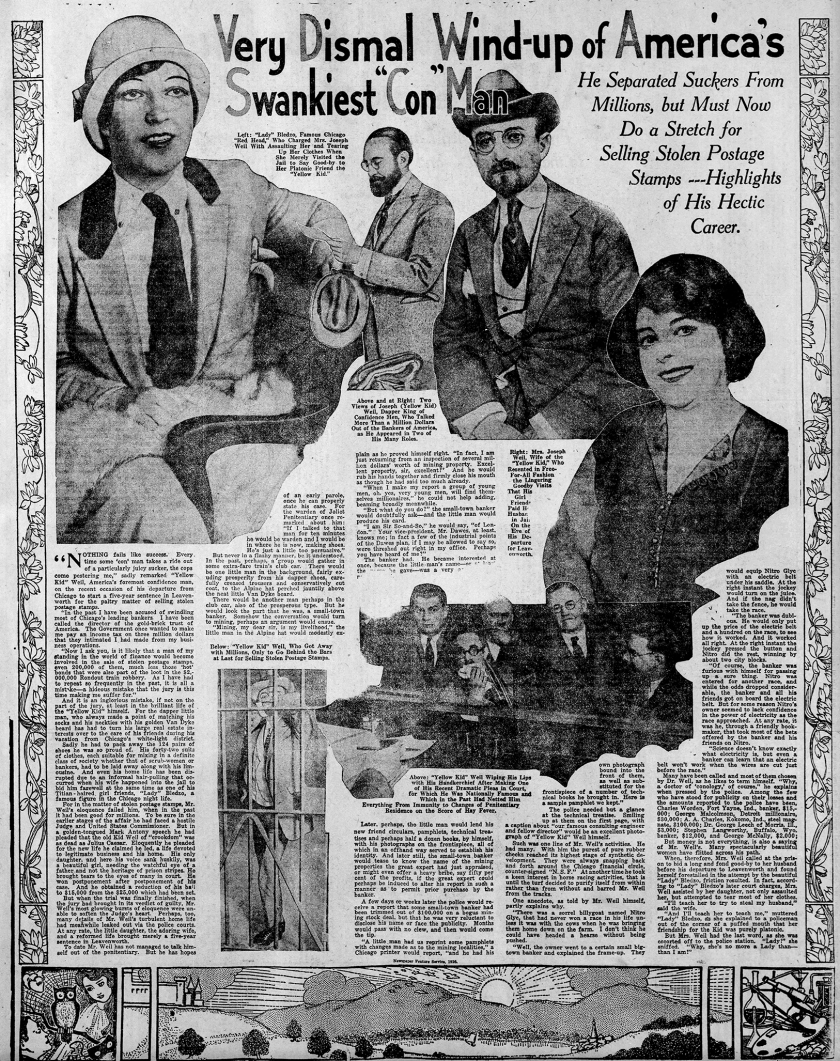 That summer, the syndicate put out a full-page profile of Joseph Weil, with some Lady Bledzo thrown in for levity. Again, she was the appendage, the affinity, the hanger-on.

Lady Bledzo’s recent scrap with Anna Weil is tacked on at the end. It is already embellished.

The article ran in numerous papers throughout the country. She didn’t have money, but she did have some notoriety. 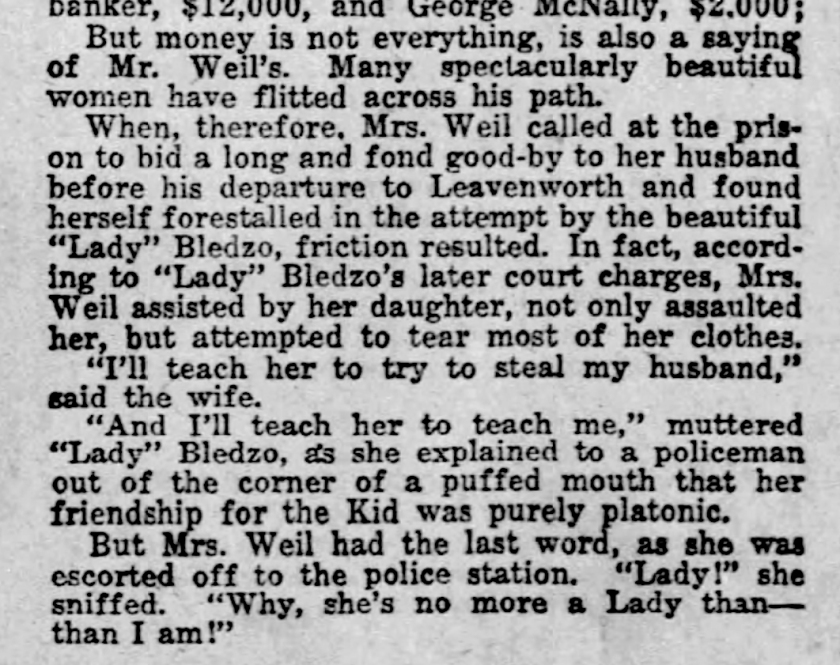 Fortunately, no one had been badly injured when the car hit the milk truck that early morning, but Lady Bledzo suffered cuts to her face. Repairing the scars might be why she ended up in the offices of Dr. Henry Schireson that fall.

Schireson was a nationally known plastic surgeon, most famous for tweaking the nose of actress Fannie Brice. He worked on actors passing through to California, and was often quoted as an expert.

He was also a tremendous fraud who shouldn’t have been allowed anywhere near a scalpel.

But that’s for another time. Lady Bledzo had a different man lined up in her sights. There was a millionaire’s son in the waiting room that day, and he had scars of his own. ☗

*The Chicago Tribune called Lady Bledzo’s friend “Gale Sherwood.” The Chicago Daily News photo and other sources say Coudray or Coudre. Searches have failed to turn up any record of a woman with either name. My guess is that she was an entertainer of some sort.

We doff our caps to the helpful staff at the Chicago History Museum’s Research Center.