As always, it was the photos on the stone what got me. And the “Dixieland Jazz” inscription. And then the three keys embedded in its surface.

Unfortunately, I wasn’t able to figure out what the keys are about. If anyone from the Benson family shows up and would like to explain those, I would love to hear the reason for them.

Minor mystery aside, there’s still plenty to discuss when it comes to Hal Benson.

Cue the Orchestra (1908-1920s)
Appropriately, Harold Creed Benson and jazz itself were born around the same time. In 1908, King Oliver started playing jazz in New Orleans, and Harold was born that May.

Hal was, in so many ways, Chicago to the core. The first 20 years of his life were spent in a rented home at 3530 N. Wilton, half a block south of the Addison El stop. The station was already there by the time Hal was born — the El tracks ran behind the Bensons’ house.

But his Chicago roots were even more profound than having the El in your backyard. Hal’s paternal grandfather, Olof Benson, was a chief player in the creation and landscaping of Lincoln Park, and its superintendent for more than a decade.

His parents, Mabel and Olof A. Benson, were both Swedish by way of Chicago. Their home on Wilton must have been crowded — Mabel’s mother and her two brothers also lived with them. The Wilton Street address means they all would have watched Weeghman Field (later Wrigley Field) be built in 1914, when Hal was 6. What fun for a little boy to have that at the end of his block.

By 1920, the family still lived on Wilton, and Olof now managed an investment bank. Hal was 12: The war was over, his teenage years were just beginning, and JAZZ had arrived.

The moving waves of the Great Migration had brought their music from the South along with them. As early as 1916, “Stein’s Dixie Jass Band” was appearing in Chicago. A year later, as the “Original Dixieland Jazz Band,” they made some of the first jazz recordings. Although the Wikipedia entry describes the band as “racially integrated,” everyone in the band’s early photos is white.

This will come up again.

Up Tempo (1930s)
As of 1930, Olof, Mabel, and Hal had moved away from Wilton Street, and near the heavily Swedish area called Andersonville. The census shows that Hal, 22, now had a real job: “Piano player.”

Hal probably needed the money. The following year, he married 20-year-old Marion Watson, and by December they were parents to a baby girl. (Some of Hal Benson’s children appear to be still living, so I’m not naming any of them.)

A second daughter followed, along with an apartment at 5670 N. Ridge Avenue. This may have been particularly necessary for Hal’s work, as it put them right next to one of the city’s major entertainment districts. Within a mile in any direction he could reach nationally known venues like the Granada or the Aragon Ballroom, major hotels, or smaller nightclubs. The crowds in these venues were mainly white, even when the musicians weren’t.

Working Man Blues (1940s)
The 1930s and 1940s were a high time for a musician who could do the work. Along with theaters and nightclubs, there were hotel dances, radio gigs, recordings, composing assignments, and orchestra jobs as the swing bands swelled in size. The 1940 census described Hal as a musician in a “regular orchestra,” which sounds prestigious.

But however many jobs, and however fancily named, I don’t think it was enough. That 1940 census also reports that he earned just $650 in the previous year — about $12,000 today. With Marion and two little ones at home, money must have been very tight.

By 1944, Marion was Hal’s ex-wife; that year he married Agnes Flanagan. More children followed, both boys and girls, maybe as many as five. (It’s tough to tell. Seven children are listed in Hal’s obituary, but some of them appear to have changed their surnames later.)

Hal’s gravestone hints to a big trip around this time. The left-hand photo on the stone looks to date from the 1940s. Upon scrutiny, the building in the photo’s background turns out to be the Pacific Square Ballroom in San Diego.

What was he doing there? I wish I knew; I suspect it was work-related. Hal’s name never appeared in the papers or in ads for shows at this time. He was a background guy, playing the piano while someone else took the microphone.

Briefly, that “someone else” was well-known band leader Louis Prima.

Primastyle
World War II spelled the end of the big band gigs, and Hal took a steadier job on the South Side. From late 1945 until about 1947, he was now the pianist at Alberto’s Italian restaurant on West 63rd Street. He was featured in their ads for months, with a playing style described as “a bit on the spectacular side.”

From the caption, it’s clear that Hal tried multiple ways to earn a living. I was unable to track down what he wrote for NBC, or what “hit songs” he may have written. They probably didn’t go far.

The Louis Prima connection is also a bit tenuous, but I think I cracked it.

Louis Prima played two stands in Chicago before 1946. The first was a six-week stand at the Blackhawk Hotel in Autumn 1936. It was Prima’s first try at leading a big band…and it did not go well. “Gargantuan is a good word to describe the sound of the flop,” crowed the review in Downbeat.

Frank Pinero was Prima’s piano player at the time time, so Hal may have played during Prima’s second visit, in 1944. This time, at the Sherman Hotel’s Panther Room, Prima was a smash hit. During their two-week stand, he and the band played to a screaming, mobbing 12,000 people.

I really hope this was Hal’s experience. I hope he got to enjoy some absolutely insane crowds. I hope it was a blast.

New Orleans Stomp (1947 to 1970)
In 1947, in line with a national Dixieland jazz revival, Jazz Ltd. opened in Chicago. The tiny club played only Dixieland jazz, and quickly became the center of the Chicago Dixieland jazz scene.

There was not only a scene — a distinctive Chicago Dixieland sound quickly developed.  Jazz Ltd. was a small club and couldn’t accommodate more than five musicians, so the resulting ensembles were small. And unlike in New Orleans, Chicago bands had no tie to marching band culture and its need for mobility. They could use instruments that would otherwise be off-limits — such as piano.

Hal seems to have embraced the taste for Dixieland jazz wholeheartedly. In 1953, he was featured with clarinetist Johnny Lane in a revue at the Moulin Rouge.

By 1961, Hal began his long-term association with a well-known Dixieland ensemble, Smokey Stover and his Red-Hot Firemen. This band actually traveled quite a bit. In 1962 alone, they had gigs in Ft. Lauderdale; Las Vegas; and Mattoon, IL. There were more gig notices and ads than I have room to show you here. 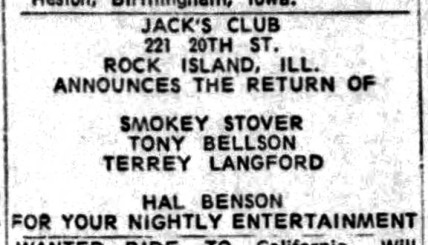 Hal continued playing with Smokey Stover and his band, even while working a new and somewhat surprising gig in Chicago.

Around 1963, Chicago got a genuine Mississippi riverboat: the Sari-S. It offered dining, dancing, brass spittoons, and a “card sharp” who did tricks for the guests’ entertainment.

The Sari-S also had a house band. Hal was with the boat’s “Riverboat Ramblers” from 1963 to at least 1965 — on guitar this time. In 1966 the boat’s management shifted its entertainment to a floor revue, and then a big band. I don’t know if Hal was still there at that time. Through 1968 until 1971, he appears to have downshifted to smaller venues.

The Edge Lounge in Rogers Park seems to have been a particular favorite for him around this time. I found multiple notices about these little afternoon sessions.

The downshift may not have been his choice. The problem may have been Dixieland jazz itself.

From its earliest recordings, racial conflicts were baked into the form. In the 1910s, black jazz musicians, who labels refused to sign, had to watch the all-white “Original Dixieland Jazz Band” be hailed as the founders of a new music. As Dixieland jazz developed its style, it was often viewed as a watered-down “white jazz,” because of both the performers and the audience. Even the Dixieland clubs that sprung up in Chicago were mostly on the (mostly white) North Side, downtown, and the West Side — and very few on the South Side.

While jazz itself continued to innovate and grow in the mid-century, spinning off new forms like bebop, Dixieland was about preserving the past. And some Dixieland standards contain racist lyrics that, while they were of their time, you wouldn’t want to sing out loud today.

By the 1960s, with the Civil Rights movement hitting a peak, nostalgia for a cartoonishly simplified Southern “Dixieland” looked increasingly out of touch.

The Sari-S closed in 1970. The Dixieland venues started to fade away.

Bringing it Home (1970 and On)
Hal was now 62. The second marriage had also ended. The kids were grown. But he still had his music.

For 10 years, from 1971 until he retired for good in 1981, Hal played piano at the Cypress Inn in Northbrook, IL. He also continued to jam with Smokey Stover’s band, appearing with them at the Central Illinois Jazz Festival in 1976.

Hal died on Sept. 20, 1984, in a nursing facility just blocks from Lincoln Park, his grandfather’s legacy.

According to his obituary, his nickname was Dr. Jazz, which may be a reference to this King Oliver song.

It’s a pretty fun tune — I think you’ll like it. ☗

A special thank-you to the very helpful librarians at the U. of Chicago Libraries and the Jazz Institute of Chicago’s Jimmy Granato Collection.