By the sixth day, the people of Coles County were tired. The suicide-or-murder question still hadn’t been answered. Cora Stallman’s curious death had made national papers, bringing 19 press agents to Mattoon. They chased the story, and the locals, like a honking flock of geese. For the journalists, too, their time in small-town Illinois was getting old. Telegrams in their pockets barked: Get a story or get home.

Fortunately for everyone, on Thursday, Coroner FS Schilling and the other investigators — State’s Attorney Charles Fletcher, Sheriff Tom McNutt, and Deputy Sheriff Frank Shirley — were ready to talk.

It’s unclear whether the men held a formal press conference, or just started talking. They had much to say.

Cora’s death had not stopped the flow of anonymous letters. One came for Cora’s sister, Anna Seaman. Thomas Seaman’s brother, Ed, got two of them. They even arrived for Edith Lilley, the wife of Thomas and Anna’s hired hand, Boss Lilley.1

Some of these new letters carried Humboldt, IL, postmarks, and a girl had been spotted mailing them on July 31, the day before Cora died. Deputy Shirley was sent to investigate.

Cora had been to the Humboldt post office recently, but not on July 31. She had bought envelopes, preprinted with postage. These new Humboldt letters had pasted stamps. But Shirley’s trip was not a waste. In the most circular way, it led him directly back to the Seamans. Cora had not been in the post office that day — but Edith Lilley was.

Earlier in the week:

Edith was not inclined to discuss it.

In fairness to her, Edith had four kids aged 5-12 and a farm to tend to. Her time was already short, even before Shirley and his boss, McNutt, showed up asking questions. A witness had seen her buying stamps.2

Her first answer to them was that no, she hadn’t been there and hadn’t done any of that. She was quickly corrected.

Clearly, they were not done with Edith. For now, McNutt, Shirley, and Fletcher could say that Cora hadn’t written the new letters — if any.1

“Stories Which Cause Some Speculation”

Edith was amusing, but the newswriters really wanted to hear about Cora. Could the investigators say, at last, whether she had died by murder or suicide?

They could not and would not. Both Schilling and Fletcher refused to be pinned to an answer. However, both also conceded that suicide no longer seemed so likely.

The day before, the two men and the sheriffs had held another question-and-answer session with Anna and Thomas Seaman. The answers they got were contradictory and surprising.

Here, Schilling took over. He started by recounting the events from that Saturday, August 1, when Cora was found.

He had arrived on Anna Seaman’s farm shortly after 8 AM, and Thomas took him to see Cora’s body. She was fully dressed. Her hair and clothes were damp, but she was dry on her back, from her waist to her neck. There were no signs of a struggle, and no outward evidence of poison. Her neck wasn’t broken. She was in “full menstruation.”

Rigor mortis had not yet set in.1 By itself, this indicates that Cora had been dead only a short time — perhaps as few as three hours.

“From all of this we cannot find any evidence of suicide,” Schilling told the journalists.

Thomas’ first story to Schilling that morning was that he spotted Cora sitting in the cottage cistern and pulled her body out himself. Now, he said that Boss Lilley had helped him remove her. Then he had Lilley call a friend of Anna’s, to see if she was back from her riverboat trip yet.1

Thomas had more revisions. Instead of Cora sitting in the water, now he said she had been propped up or leaning, with her feet planted and lower back/hips against the cistern’s north filter wall. Although her back and neck were dry, her face had been in the cistern water, about 30″-33” deep.3 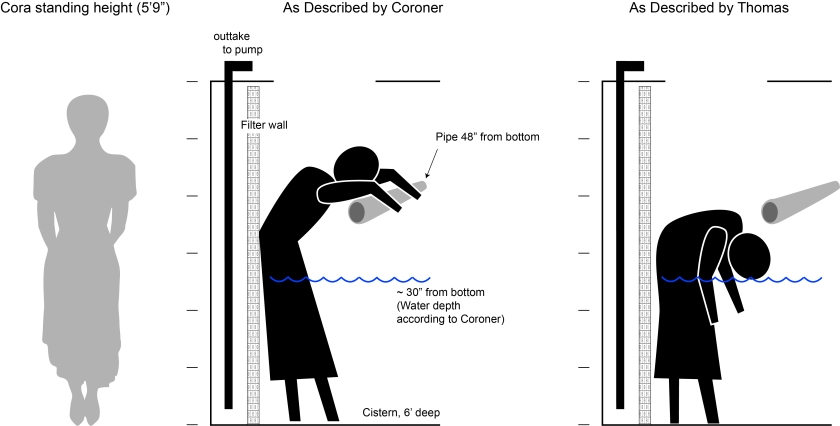 The cistern had a pipe (probably for overflow) running west to east, about two-thirds of the way across the cistern and 48” up from its floor. Schilling believed she had been bent across the pipe; the few scratches on her forehead could have come from striking it.

To his eye, a slumping or standing Cora was not the pose of someone who had climbed into the cistern and died. This position spoke instead to a body dropped or thrown in the water. McNutt added that if Cora had taken poison, her body would have sagged or fallen. Schilling agreed.3

The autopsy had found no water in Cora’s lungs. If she had still been breathing when her face met the water, she likely would have inhaled some.1 A few doctors had contacted Schilling to offer that, even without lung fluid present, drowning was still possible, if unlikely.

His implication was obvious: For all the State’s Attorney’s cautious mentions of suicide, or even death by cold-water shock, the clues were pointing elsewhere. Cora had not committed suicide. She had not jumped or climbed into the cistern. She had almost certainly not drowned.

She was probably already dead. Someone had placed her in the cistern after her death.

I mostly agree with this. Mostly.

I’m fortunate to have a patient husband, who also happens to be about 5’ 9” — Cora’s height. We experimented in our hallway at home, attempting to recreate the poses described by Thomas and Schilling. Both of us were able to get our face down to the water height, but only when the pipe was not involved. No form of slumping could achieve bending over a pipe at 48” high AND getting our faces down to 33” of water level. Schilling’s description doesn’t seem physically possible.

Thomas’ description is also troubling. Even if Cora slumped in half against the filter wall, she wouldn’t have muscle strength. Her legs would have given way. I find it hard to believe a dead body could have supported its own weight against the wall for hours.

Personally, I’m skeptical that Cora was ever in the cistern.

In addition to Cora’s body, Schilling had examined the cottage where she lived and maybe died.

Her little home had “every appearance of having been occupied during the night, and evidently by a woman.” In the bedroom, there were signs of recent sleeping: a gown and cap on the bed, a silver pitcher “of very fine quality” with fresh water, and a glass tumbler half full of water.1

Here, too, there was a new story to tell. Thomas originally told Schilling that Cora had slept Friday night on the sleeping porch, on the east side of the main house (not the cottage). “Seaman even walked to the door of the room and showed me the room himself.” Later, Schilling learned that Thomas told others that HE slept on the sleeping porch while Cora slept in a room in the main house.1

“These are stories which cause some speculation,” he added dryly.

The Idea of Such a Thing

Anna was not spared Schilling’s scrutiny. She too, had an…inconsistent take on the situation.

For me, so much turns on this point.

I have two sisters. I cannot fathom what it would take for me to do this kind of reversal on them, especially to the media. I would have to learn something absolutely devastating, something unforgivable. And it happens so quickly, too — on Saturday, she’s insisting that Cora was sane. By Monday, she’s saying the opposite.

And she does not yield.

The fact that Anna continues to insist on describing her Cora as insane, even in the face of evidence otherwise, I can only read as an astounding betrayal.

Others who knew Cora seem to have viewed this the same way. Her friends began to speak up, to correct the record and remember the person they knew.

So, the question of murder versus suicide remained officially unanswered. Bureaucracy made it worse.

Thanks to an absent witness and out-of-town inquest jurors, the inquest was postponed indefinitely. And due to a lack of county funds, there could be no testing of Cora’s organs for poison, or analyzing the anonymous letters.1

There was certainly call to run the tests — both from the coroner and the public. But the matter had forced the county treasurer to reveal that he had no funds. In fact, he had not even paid the county’s April bills yet. According to Fletcher, it would take a special session of county supervisors to allot any money.1

One of the newspapermen was brave enough to ask if the Seaman family could pay for the tests. Fletcher answered that it would not be right for the Seamans to bear the cost of such testing. There would be no asking them. ☗