By the mid-1930s, Dorothy Eagles’ North Side Animal Shelter was thriving. The new location on Damen Avenue had a two-story brick building at its center. It featured offices, medical care, an annex housing 70 cats and dogs — even pet cremation services. Every year, hundreds of animals came in, were cared for, and found new owners.1

But care cannot save everything.

Dorothy’s husband, Lester Eagles, never got much mention in the newspapers. I know he built the first shelter’s cages, and that he would go out on calls to pick up strays. But beyond that, he’s a bit of a mystery.

Also a mystery is why their marriage ended. While I couldn’t find a divorce date, by 1936, Dorothy was vacationing in Palm Springs with a man named George Harz.2

Doctor George Harz, that is… a veterinarian.

George
Dr. George T. Harz was, like Dorothy, a born-and-raised Chicagoan. Also like her, his earliest years were spent around animals — horses. His father, Cesar Harz, ran one of the most successful livery (horse and cab) businesses in Chicago. Tragically, Cesar was murdered in a wage dispute in 1902. George was only 14.3

By 1910, George’s life was established. He had a wife, Gladys Price; a son, George Jr.; and a job as a veterinarian. Gladys appears to have been a tough cookie. She sold real estate, wrote a column for the Chicago Daily Herald (“Timely Tales from Tessville”), and built an entire house herself with small assists from George. You sense that he liked motivated women.4

George and Gladys’ second son, Oliver, was born in 1920. Sadly, he lived just one day. That year the census shows the Harz family in an apartment on Arlington Place, near Lincoln Park.5

By the 1930 census, the family was fractured. George lived in the house Gladys had built on Devon Avenue, and told the census-taker that he was married. Gladys and their son lived far south on Ashland Avenue — but she told the census that she was divorced.6

George and Dorothy
It’s unclear when or how George Harz and Dorothy Eagles met. Obviously, their life’s work could have easily brought them together. George’s veterinary office, at 4506 N. Broadway, was just a mile south of the North Side Animal Shelter’s ill-starred location on that same street.

There is one clue. In 1944, the Desert Sun newspaper notes that they’ve been visiting Palm Springs together for eight years — or since about 1936.2

The first time they’re mentioned together is in 1937, in an article that is mostly about George.

Dr. Harz’s veterinary office had adopted a cat, one that Dorothy had brought in. The cat had a little mustache, and it was 1937… so the name he chose isn’t really all that surprising.7

The article says he’d had the cat for a year, so Dorothy brought it to him around 1936. I see two possibilities.

Either they didn’t yet know each other, which means Hitler-the-girl-cat could have brought them together.

Or, they were already involved. By then Dorothy is on Damen, no longer near his office. Her shelter has plenty of facilities, so there’s probably no real need for her to bring him this cat. And yet she does anyway.

Luckily for George, Dorothy doesn’t seem to have held his choice in pet names against him. They married in January 1939.

I couldn’t find a marriage record anywhere in Illinois or Indiana. I had to cast a very wide net to find a mention in, surprisingly, Louisville, Kentucky. Neither George nor Dorothy had any family connections there, so it seems like a curious choice for a wedding.8

It might not be the worst choice if you were eloping, however.

1940s
In 1940, the couple was at home in a three-flat at on West Summerdale Ave., just a quarter mile from the shelter on Damen. They seem to have kept their marriage very quiet. Dorothy continued to use her first married surname, Eagles, in professional appearances.9

This very-Dorothy-Eagles story about catching a dog with a baby buggy appeared in June 1941. It doesn’t mention that the veterinarian and the plucky animal lover were also husband and wife. You wonder if the writer even knew.10

Again that year, when Dorothy rescues a dog with “knockout drops,” she takes it to a certain veterinary office on Broadway. It’s George’s office, but there’s no mention of George.11 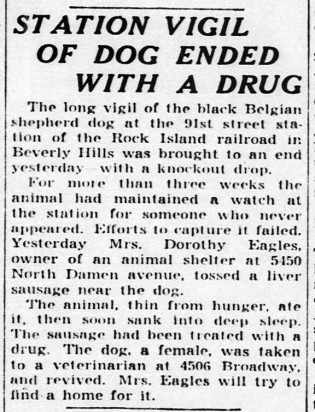 The mid-1940s seem to have been a good time for both the couple and the shelter itself. Dorothy continued to make radio appearances, now promoting efforts to adopt dogs whose owners had enlisted.

In 1943, George and Dorothy even bought second a home in Palm Springs. They were part of the community, making an annual spring stay that lasted for weeks.2

1946 had two notable events, one special and one… that was amusing.

In May, the North Side Animal Shelter celebrated 20 years in business. George was now working there.1

In September, Dorothy got arrested.

A woman named Leona Young lost her dog. It was turned in to the North Side Animal Shelter, which paid a $1 finder’s fee. When Young called the shelter about getting her dog back, Dorothy asked her to refund the fee. Young refused, an argument ensued, and Dorothy called her a wench. Shortly thereafter, Young had Dorothy arrested for disorderly conduct.12 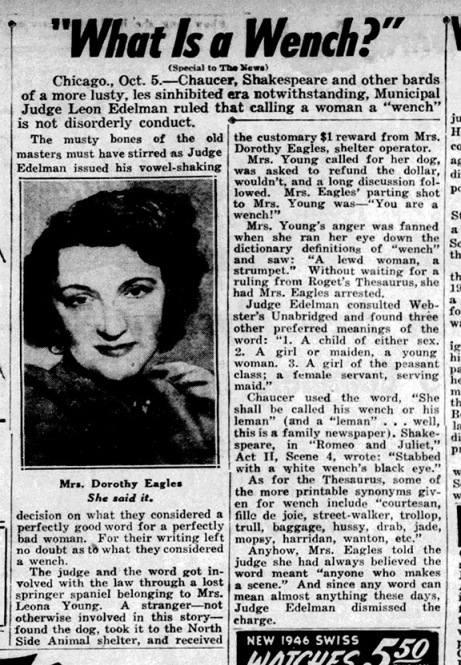 Young told the judge she was being called a “woman of loose character.” Dorothy’s defense was that SHE thought the word meant “a woman who makes a scene.” The judge pulled out a dictionary, reviewed all the possible meanings, and ruled that there were too many to be sure what she had meant. Case dismissed.13

George had his turn in court, the next year. I have to preface — this situation seems well-intended but ethically iffy on his part.

George was asked to euthanize a dog. The dog’s owner was dying, and on his deathbed, asked that “Spotty” be put down to ensure that it couldn’t suffer or be abused. Helen Moderman, connected to the deceased, had brought the dog in for the task.14

Instead, George had performed some sort of surgery on Spotty and was planning to adopt him into his family pack. Moderman sued him for mutilating a dog (I suspect George neutered him) and taking money under false pretenses.

George claimed the woman’s instructions were vague, and that he couldn’t bear to euthanize “such an appealing little beggar.” After other veterinarians testified on George’s behalf, the charges were dismissed.

Moderman took Spotty home, which may have been for the best. George told the court that he and Dorothy already had 8 dogs. How they managed this in a Chicago three-flat, I have no idea.15

Last Years
The last time I see Dorothy mentioned in the papers is this cheery clipping from 1947.16

For a woman who garnered plenty of positive attention in life, her death seems to have been the opposite.

Dorothy died in Palm Springs, in March 1950. She was 58. I couldn’t find an obituary anywhere — not in Chicago, not in California. I only have a state record of her death, and that gives me just the date. How she died remains a mystery. Given her youngish age, I would suspect an illness such as cancer or heart disease.17

George continued to visit Palm Springs as late as 1957. By then he was 70, probably ready for retirement. His son ran a vacation lodge in northern Wisconsin, which is where George headed. He died there in 1970.

George and Dorothy share the same plot, in Forest Home Cemetery (Fifield, Wisc.). Thanks to the lovely and helpful staff at the cemetery, I know that both were cremated. Gladys, George’s first wife, is buried in the next space, which tells me that their son George, Jr. probably bought the plot.18

Going by Findagrave.com, it looks like Dorothy doesn’t have a headstone. That, and the lack of obituary, make me a little sad. I don’t suspect anything sinister. It probably played out something like this:

I’m also unable to determine what happened to the animal shelter. It fades from the press around the same time that George does, the late 1950s. There’s no notice of its closing. There’s now a car wash at that address, and no nearby building matches the shelter’s description.

However, there is a doggy daycare next door, and a dog-training facility a block away — two large and friendly-looking places for people who care about their animals.