The handsome young man in the derby hat.

How could I resist that face? 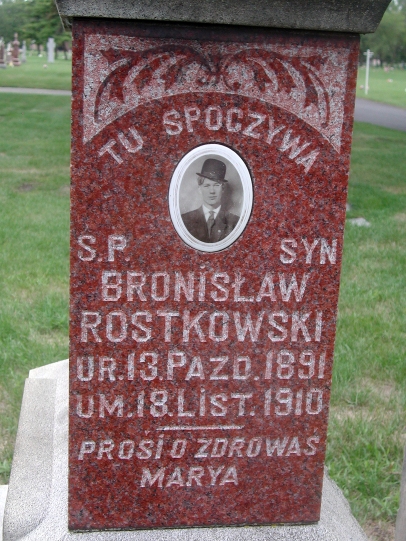 He is Bronislaw on his headstone and Barney on his death certificate, but his family called him Bruno. He may be the most dapper man in St. Adalbert’s Cemetery.

Some Polish-speaking friends helped translate his headstone for me. “S.P.” is short for swietej pamieci — in holy memory.

He was not yet 20. Young people naturally leave very short trails; I know them almost entirely through their endings. But even though Bruno didn’t get much time to make his mark, there is still information out there.

Family
Bruno was born in 1891, in the village of Szumsko — now Poland, then Prussia — about 90 miles from Krakow.1 Parents Felix and Antonina, with baby Bruno, immigrated to Chicago the next year. They ended up just west of the Chicago River, first on Hervey Avenue and then on Avers Avenue, a few blocks north of what is now Kosciuszko Park.

Bruno spent his life in this small area. For his parents, it must have felt very like home. They were at the dead center of Polish-American life. The headquarters of nearly every Polish-American newspaper and fraternal organization were within the area shown on this map.

The community was flowering and vibrant. When a monument to Polish hero Thaddeus Kosciuszko was dedicated in 1904, the unveiling ceremony was preceded by a parade with 700 floats. A hundred thousand people filled Humboldt Park for the celebration.2

Bruno would have been about 13. It’s not a stretch to imagine that he might have attended the party.

Circles indicate the Rostkowski home on Avers (blue) and the nearest Catholic church, St. Hyacinth (red). The “Polish triangle,” the center of the Polish community, is indicated in blue.

In this space, the family grew quickly. By the 1900 census, Felix and Antonina had five boys, ranging from Bruno at age 9 to baby Kasimir.3 Their house must have been full of little-boy energy. Two more children would be born after Bruno died.

The 1900 census notes that Bruno has had four years of schooling. He wouldn’t be in school much longer.

Work
Bruno was a “core maker,” and his death certificate says he’d been at it for five years. He started doing factory work when he was about 14.4

A core-maker’s job is to make sand-packed molds (cores) for molding metal objects. In Bruno’s case, he was making machine parts for International Harvester, which was then a world leader in farm equipment. The Deering Works plant could produce a thousand finished machines every day.

I was so pleased to find these two photos from the Wisconsin Historical Society.5 The first is the International Harvester core-making room in Chicago, in 1905. In other words, this is probably where Bruno worked, at about the time he was there.

In core-making, you tamp (“ram”) damp sand into frames around an object to create a mold. It is dirty, stinky labor. By chance, I have actually done this work — in junior high metal shop, not an unheated 1900s factory. Based on my junior-high memories, and some YouTube videos6, I put together a very rough schematic of how cores are built.

The second photo shows the finished cores at International Harvester, waiting for metal to be poured in them. You can imagine the effort it took to pack those frames with sand, flip them and move them, all day long. And that hanging bucket may have molten metal in it.

International Harvester was actually considered to pay well. It had incentive to do so. The most recent strike had been in 1903 (led by women), and another was threatened in 1904. The company also prided itself on providing amenities like a baseball team and a lavish clubhouse for workers.7 The clubhouse featured billiards, a bowling alley, and other attractions. But that, too, had a motive behind it. The company hoped that if the employees had somewhere to go, “It will prove a magnet to draw the employes from saloons and other places of resort where waste of money and weariness of flesh are the penalties that add to loss of time.”8

I question whether someone of Bruno’s level would have ever had the time or inclination to use the clubhouse. I hope he did. I hope he got to go in and shoot some stick.

The End
Bruno’s employee benefits also included insurance. By some wild luck, an International Harvester company magazine from 1910 is available on Google Books. Thanks to the included table, we see that Bruno worked at the Deering Works division, and that his parents were given a year’s wages in death benefits.9

After subtracting the two pensioners’ payments of $700 each, the other people on this list are averaging $750/year in salary. With inflation, it was about $19,000 in today’s money.

Ultimately, he was just really unlucky: Diphtheria got him.4 Chicago saw only 822 deaths from the illness that year, out of almost 8,000 cases. A highly contagious disease that first seems like a cold, diphtheria can come on quickly and strikes the young particularly hard.

The poignancy of this is borne out by the notation in Bruno’s burial record: Umarł nagle. “Died suddenly.”1

[8] Quote about motivation for building clubhouse.