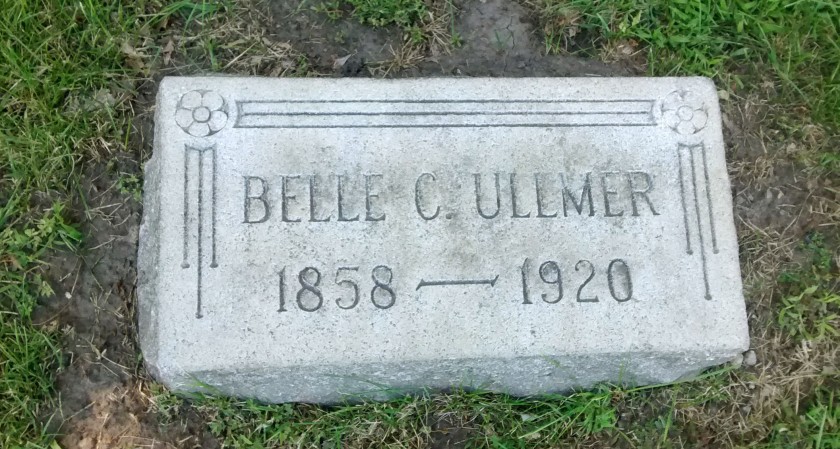 Before I get too deep into telling stories, I wanted to show how I work. Belle Ullmer here has (been) volunteered to run us through the process.

I think I noticed this one because I liked her name. Belle is just so pretty.

I thought she would be a good Snooping 101 test case because she has a distinctive name; she lived in years that are well documented in vital records; and as she is a woman, finding her might be a little trickier.

The lives of women can be hard to trace. Maiden names vanish from the record. Housewives rarely made the news. But they were here.

What the stone tells us:

Newspapers.com: Searches for “Belle Ullmer” and “Bell Ullmer” turn up a woman in Iowa but nothing in Chicago. Hmm. Well, we’ll keep it in the back of our minds.

I know the Illinois Secretary of State keeps some searchable vital records databases, including one of death certificates.

Now this is good. First, it tells us that between 1916 and 1950, only three Ullmer deaths were recorded in the whole state. Even better, this Belle has her middle name listed as Cummings—which fits with the “Belle C. Ullmer” on her headstone. We also have an exact death date, and verification that it happened in Chicago. This is our woman.

With our new name information, let’s go back to Newspapers.com and try a few more searches.

O-KAY. This obituary4 has some very helpful stuff in it.

Next, I’m taking all that to Ancestry.com. Let’s find that 1910 census record we saw at the outset. 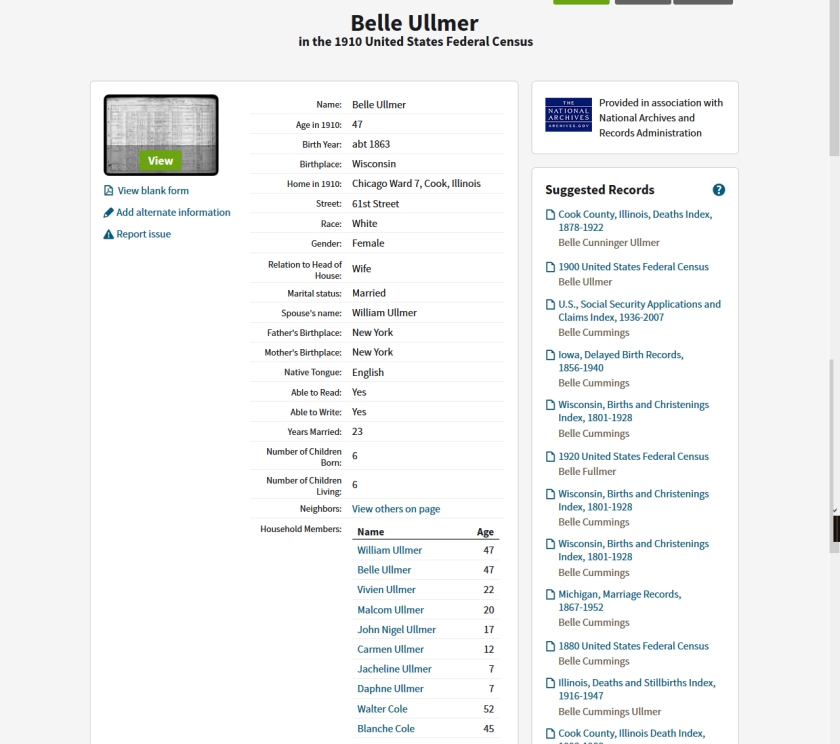 I can see that this census record5 has several matches with the children mentioned in the obituary, and it has the same name constellation of Carmen, Jacqueline, and Daphne. So I’m comfortable calling this the same family.

It says Belle was born in Wisconsin, and was the mother of at least six. The estimated birth year (1863), however, doesn’t match our stone. It’s off by five years. Hmm.

Before the advent of a mail-in census, a census taker would come to your home, ask questions of someone in charge or just at home that day, and fill out the form. Transcription errors and other mistakes did happen.

If you go to the page image, it will show you that William was born in Wisconsin, too, and works as a portrait painter. That’s pretty cool. They’ve been married 23 years, so now we can estimate a marriage year of 1887.

Stepping back a decade, there are only three Belle Ullmers in the 1900 US census6—one divorced, one single, and one with a husband named William (bingo). This time, though, the family is living in Kansas City. We now have a birthplace of Michigan for Belle, rather than Wisconsin—and a birth year of 1872, which is way off the 1858 on her stone. This would make her 15 at the time of her first child.

While this is certainly possible, it sends up a flag for me, especially because the headstone says 1858. When people pay to have things literally carved in stone, they tend to be picky about accuracy. I trust the headstone more than the census in this case. A five-year error could just be an error; making her 15 years younger looks like a deliberate choice.

Going to the image itself, we see that now they’re in Missouri, the two oldest children were born in Wisconsin, and the two younger ones were born in Iowa. That’s a lot of moving. Also: Weren’t there some Iowa hits at the beginning of this search?

We can’t know what was going on here, but there were clearly significant financial difficulties in Iowa. The average US salary in 1900 was $449.9 I put the judgment amount into several different online converters, all of which put it at about $100K in today’s money. I’m not sure how you get into that kind of trouble, or how you get out of it.

(Also: What is going on with those cases above and below hers?)

Belle and William must have recovered somehow. Below is a clipping from the 1911 Blue Book for Chicago10, which provided “Names and Addresses of Prominent Residents, arranged Alphabetically and Numerically by Streets, Membership List of the Leading Clubs, and other Valuable Information.”

If you were IN, you were in the book, and vice versa. Ten years after their Iowa situation, William and Belle had done well enough to make the 1911, 1912, and 1913 editions.

I could go further. There are definitely some unpulled threads here. But for now, we will leave her. ☗

Headstone photo taken by the author at Rosehill Cemetery. September 2016.

One thought on “Snoop 101: Belle Ullmer”