They can’t all be good guys.

Mt. Carmel Catholic Cemetery in Hillside, IL, is packed with striking, dramatic headstones. Calogero Lalumia’s is one of them.

His headstone is probably four feet tall, with a great swoop of lilies, a curling scroll, and his surname in those fabulous raised letters. And he’s in a tux, so of course I had to take his photo.

Calogero — Carlo — shows the research pitfalls of… well, dying early and living a life under the radar. He was only 30, and he left very little behind. I couldn’t locate a single census reference or directory listing for him. I found just a few documents and one newspaper article to mark his brief life.

From the records available, I can tell you that Carlo was born in Campofelice, Sicily, in 1892.1 His emigration is tougher to pin down — possibly 1909?2 I can say that at some point he got to Chicago. He married Margaret Giglio here in July 1921, and they had a baby girl in April 1922. Benedetto and Elena Giglio, shown on the headstone, were her parents.3, 4

The neighborhood’s first nickname was Little Hell. It sprang up shortly after the Great Fire of 1871, a tract of closely placed and hastily built wooden frame houses for workers rebuilding the burned city. It was just outside the border that banned such structures, which should give you an idea of their quality.6 The neighborhood was populated first by Irish laborers, then Swedes. Around 1890-1900, when the area started to fill up with Italians, Little Hell became Little Sicily.

By the time Carlo was married in the early 1920s, multifamily houses and apartments crowded every block. Many lots had more than one building. Glancing over the 1920 census records, the density is obvious. Most households list 4, 5, 6, 7 people — room-sharing laborers or big families, large groups sharing small spaces. Amenities were few. Less than a mile from the sleek refinements of the Gold Coast, the residents of Little Sicily endured grinding poverty. Most homes there still didn’t have bathtubs.7 The public bathhouse was a popular place.

The most notorious spot in this poor and densely populated neighborhood was — according to the newspapers — the corner of Oak and Milton streets. (Milton has since been renamed Cleveland.) The Chicago Tribune seems to have taken particular relish in dubbing this spot the “Death Corner.” There was some validity to this: The corner itself was the site of multiple murders in just a few years.

However, the newspapers occasionally took the liberty of naming deaths as being on the Death Corner, even when they were two blocks away, as shown here. And they certainly didn’t shy away from trafficking in stereotypes about Italians as dark, mysterious, and vengeance-minded.8

Despite all the negative publicity, it was like any other urban neighborhood: full of children, and street vendors, and life lived on the sidewalks. Sociologists remarked on their crowded but fastidiously clean homes. Family stability was prized; desertions were few.9 (You can read more about life in Little Sicily — particularly the sustaining role played by its churches — here.)

I hesitate to put a pin in just one desperate incident, one article, as proof of someone’s personality. And yet it’s hard not to draw some conclusions about Carlo’s character.10

This is the article. 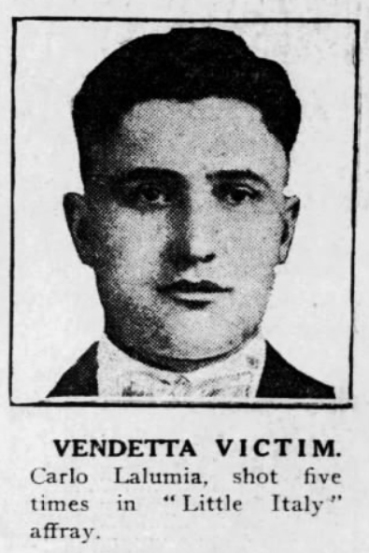 On a rainy Tuesday evening, someone came for Carlo. The shooting, at Orleans and Hill St., was about a block from the Lalumias’ apartment on Sedgwick. In the melee, he tried to hide behind an unlucky female bystander. She was shot in the leg. Carlo was then shot five times. Both made it to the hospital. He refused to name his attacker(s), and died a few hours later.11, 12 The bystander, fortunately, survived.

Carlo’s death certificate says he was a saloonkeeper.1 It’s 1922 — Prohibition. Technically, saloons are out of business. Could that work have been connected to his death? Was he even working? Was there a vendetta? Who knows. They did shoot him five times, which sounds intentional to me.

I’ve turned this one over in my head many times. There is much to dislike here. As much as I detest his no-snitching stance, I could almost allow for it. Again and again in articles about Little Sicily, you see crime victims refusing to tell the police who to look for. Poor police relations and lack of English skills didn’t help. In Carlo’s case, his silence would protect the killer, hinder the cops, and prevent Mrs. Costa from seeking justice. On the other hand, naming his killer could put his family at risk of retribution, and he wouldn’t be around to protect them.

But trying to hide behind someone and hoping they take the bullet? There is no excusing that.